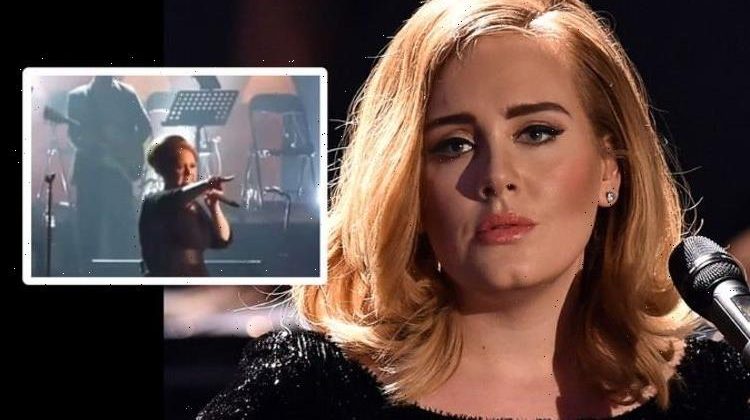 There are many things fans love about Adele, 33 – her incredible voice, her down-to-earth nature, her kind heartedness – the latter of which she demonstrated during one of her shows at Hammersmith Apollo in 2011. In the wake of the Astroworld tragedy in Houston, Texas, fans have reacted to a resurfaced clip of the Tottenham born singer, who abruptly stopped her concert when she noticed someone had fainted in the audience.

The footage was re-shared by TikTok user Shane Dermott, following Travis Scott’s performance, where eight people died at the rapper’s gig after a crowd surge, in a bid to promote awareness of safety at such events.

It was posted alongside the caption: “[She] didn’t carry on until she knew they were safe.”

Adele can be seen and heard belting out her hit song Rolling in the Deep, before she immediately stopped and alerted medics to attend to the concert-goer.

“Excuse me, medic, right in the middle.”

Attempting to direct the medical team to the person who passed out, Adele added: “Can you see? Can someone act like they care, please?

“Someone’s fainted over there.”

As medics attempted to reach the guest, Adele could be heard asking crowds to move out of their way.

It was only until she could see the person who had fainted was being tended to, that the superstar began her song again, telling the crowd: “Thank you. Guys, this is Rolling in the Deep!”

The old video has now been viewed millions of times, with many calling for the same compassion from all performers at large events.

In the comments section, one said: “Someone send this to Travis. He gotta learn a thing or two from Adele.”

Travis has since addressed the tragic events at his Astroworld concert on Friday.

The 29-year-old star issued a statement on social media saying that his prayers went out to the families of those impacted by the terrible incident.

“My prayers go out to the families and all those impacted by what happened at Astroworld Festival.

“Houston PD has my total support as they continue to look into the tragic loss of life,” he added.

Travis went on: “I am committed to working together with the Houston community to heal and support the families in need.

“Thank you to Houston PD, fire department and NRG Park for their immediate response and support. Love you all,” he signed off.

11 people were reportedly taken to hospital in cardiac arrest and eight died.

Some of the casualties were reported to be as young as 10 years old.

According to the Houston Chronicle, the singer stopped multiple times during his set when he noticed fans in distress near the front of the stage.

The paper went on to report that Travis asked security to make sure they were OK and escort them out of the crowd.

Around 50,000 people were said to be attending the outdoor event, which was then cancelled.