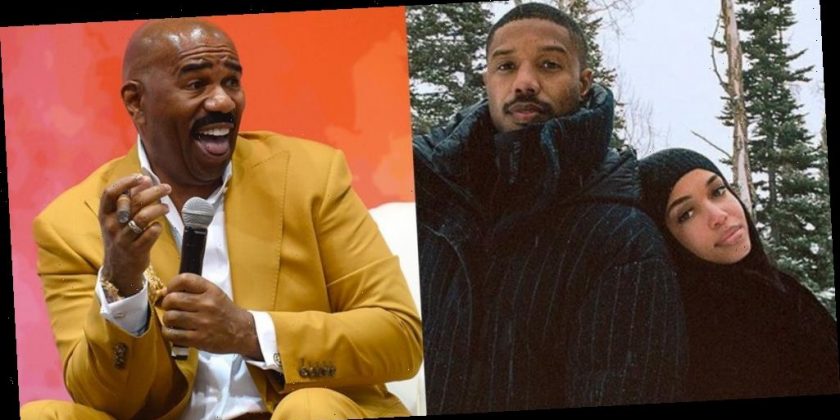 While speaking on iHeartRadio’s The Steve Harvey Morning Show, the beloved Family Feud host revealed what he really thinks of his 24-year-old stepdaughter’s new flame.

“I like this one,” Steve, 64, said about the actor. “I still got my eye on him. I mean I like him, but like I say to all of ’em, ‘I might like you, I might approve of you, but I got a thumb-size section of my heart filled with nothing but pure hatred for your ass. Just in case I need it.'”

He continued: “Like right now? Nice guy. But I got this little section, partner, where all I gotta do is click a switch and I can hate your ass.”

Making it clear that he was joking around, Steve then hilariously quipped, “‘Cause you ain’t the sexiest man in the world to me! Let’s be clear about that.”

Lori and Michael became Instagram official on January 10 when both posted photos of each other on their respective accounts. According to People, the two recently spent time together vacationing in St. Barts. The outlet also reported that the pair spent all of the “major holidays together” in November and December, indicating that they’ve been dating for at least a few months.

You love all the nitty-gritty deets on celeb gossip. So do we. Let’s overanalyze them together. ✔️

Three days after announcing their relationship to the world, the 33-year-old Black Panther star shared a sweet Instagram of himself and Lori together for her 24th birthday. In the comments section, Lori wrote, “My baby 💕.”

Back when Michael was crowned the “Sexiest Man Alive” in December, the actor claimed he was single and shared with People what he was looking for in a relationship.

“A sense of humor, true understanding, because [an actor’s] life is not conducive to a relationship—it’s really not,” Michael said at the time. “Somebody that’s nurturing. I’ve got a list. That’s probably why my a– is still single, but yeah, it’s a list.”

You betcha these little magnetic travel containers are TSA-approved. Plus, they’re super cute.

According to TikTok, these leggings will make your ass look like a juicy snacc.

A cult-icon for a reason, this is the best hair-dryer brush overall.

If “sandwich” magnetic lashes aren’t for you, try this genius magnetic eyeliner.

If you want a rabbit that does more than just vibrate in place, this is it.

This is hands-down the best at-home laser hair removal product for leg hair.

More than 28,000 reviewers say this is the best hair straightener on Amazon.

Cheeky, lacy, and oh so sexy. No wonder they’re a bestseller.