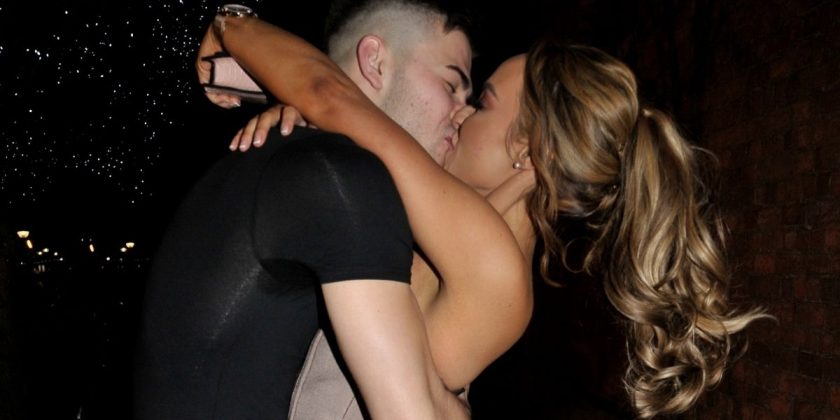 Hollyoaks star Stephanie Davis is certainly enjoying the attention of her new toyboy lover, just days after declaring herself as "very happy" with 19-year-old Owen Warner.

The mother-of-one started dating her co-star in recent weeks but after a period of keeping it on the down low, Stephanie has put on a very intimate display of public affection as she snogs Owen in the street.

The 25-year-old soap actress went ‘official’ on Friday night , when Owen announced to his 82k Instagram followers that he was with Stephanie and called her "my girl".

The Hollyoaks Christmas party seemed to be the ideal time to let down their hair and banish some of the inhibitions. Stephanie may have looked like she arrived alone but there was no doubt that she wanted to show off her new boyfriend as they got to grips with each other in the street.

There were times that her dress struggled to contain itself from presenting Stephanie with an embarrassing malfunction as Owen held her close, so that he could work his hips. Sweeping Stephanie off her feet, she was all smiles before they locked lips on the pavement, the pair unable to keep their hands from wandering around each other’s bodies.

Their new romance comes just two months after Steph reprised her role as Sinead O’Connor in Hollyoaks after a three year absence.

Meanwhile, Owen joined the cast as Romeo Quinn in July after completing his performing acts course in Leicestershire in 2017. The actress has been largely single since she ended her toxic on/off relationship with Jeremy McConnell – father of her 23-month-old son Caben-Albi – in 2017.

A source told The Sun Online : “Steph and Owen became friends when she returned to Hollyoaks but in recent weeks it’s turned into a romance.

"It’s well known among the cast that they’re dating but it’s very early days for them both."

It seems that those early days have blossomed into something more physical and they are not going to hold back in sharing their budding relationship with everyone and anyone.