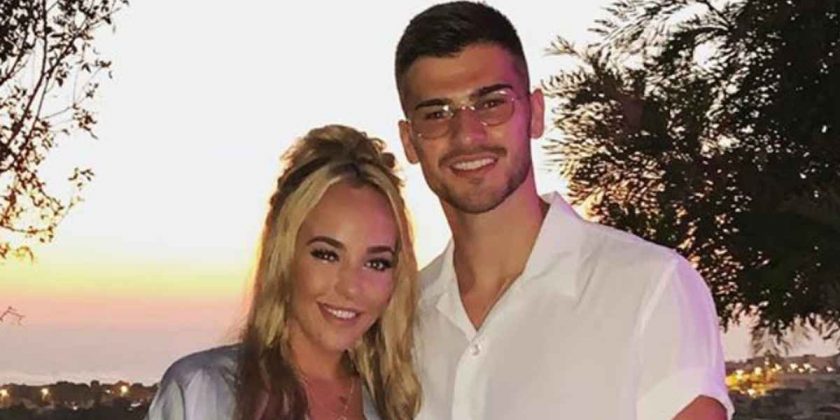 Stephanie Davis has denied reports that her relationship with toy boy Owen Warner is "on the rocks."

The actress, 26, has been dating her 20 year old Hollyoaks co-star since last December, with their relationship hotting up very quickly.

However, it was claimed on Friday that their eight month long romance had come to a halt, with Owen believed to have moved out of Stephanie's house, which she has now denied.

A source close to Stephanie exclusively told OK! online that the claims are "not true" and are to be "ignored."

Mirror Online reported earlier in the day that: "Owen has blocked her from Instagram. It was all a bit too much for him. Stephanie has been very full on the last few months.

"It was blatantly obvious she was moving the relationship forward at a rate of 100 miles an hour and him being the age he is found it very difficult to breath.

"It was all very suffocating. He’s moved out of her house but the fact they are still working together is proving very difficult for both cast and crew."

Their insider added: "She’s not the easiest person to be around when things aren’t going her way."

But a separate source close to Stephanie claimed the pair hadn't split, and have simply hit a bump in the road.

The second source said: "There’s been a bit of a blip with Owen – they’ve just had an argument that’s all – they haven’t split."

Stephanie and Owen began dating when the mum of one returned to Hollyoaks to reprise her role as Sinead O'Connor after three years away from the hit Channel 4 soap, with their romance seemingly going from strength to strength.

The claims came just two weeks after the pair sparked rumours they had become engaged during a recent holiday.

Sharing a stunning image of the pair in front of a gorgeous sunset with his 186,000 Instagram followers, he wrote: "Can't believe I found my wife," alongside a red love heart emoji.

Adding fuel to the rumours, Stephanie commented: "I can't WAIT to be your wife. I love you."

Stephanie, who is already mum to two year old Caben-Albi, told OK! online back in May that she couldn't wait to start a family with Owen.

She said: "We’re going to enjoy just being us for a bit longer and then yes. We’ll do it all properly."

Stephanie shares Caben with ex-boyfriend Jeremy McConnell, but she revealed earlier this year it is Owen that her son calls "daddy."

In a post to her 934,000 Instagram followers, Stephanie wrote a gushing message aimed at her beau, encouraging her fans to "love like no ones watching [sic]"

She wrote: “Just had to do a little post on how much I Absolutely love this man. He’s the other half of me. To think before we met we were both living different lives not knowing each other existed— is crazy.

“You have made me the happiest girl in the world! I cannot imagine my life before you, or without you. You are the kindest most beautiful person inside and out and I love every part that makes you, you.

She continued: “Your an amazing daddy to Caben and we both love you so so much. Every day I wake up so happy & smiling knowing we have another day with each other, and every night when We go to sleep I thank god for another day with you. [sic]

“It’s like when you were little and you had a sleepover with your best friend but then you had to go home and would be gutted… Well your a never ending sleepover haha (I hope that made sense to people). [sic]

“I love you Owen and cannot wait to spend the rest of my life and more with you.

“Thankyou for making me see that true love does exist and how easy it is to love you, effortless. Your the love of my life, Forever & Always. Stephanie. [sic]”