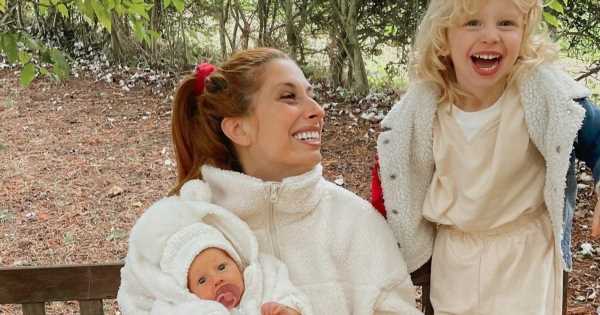 Stacey Solomon has shared an adorable video of her out exploring the garden of her £1.2 million Essex home with her son Rex, two, and baby Rose.

In the heart warming video, Rex instructs his mum to put Rose in the pram, before proceeding to push his baby sister around.

Taking in the impressive autumnal scenery, Stacey joked that Rose, who was born Monday 4 October and shares the same birthday as Stacey, was like “wow, what the hell is this new world”.

The video then goes on to show Rose in an adorable cream, teddy bear onesie being bounced around by her mum, 32, as she looked round in bewilderment.

Stacey’s then seen holding Rose while pushing two year old Rex on the swing as her husband-to-be Joe Swash filmed the beautiful moment.

The pram Rose can be seen being pushed around in is actually Rex’s doll pram , which Stacey uses because she said her five week old daughter looked “lost” in her big one.

Finally Stacey shared an adorable photo of her sitting on a bench while holding Rose, and Rex stood next to her beaming to the camera.

The 32 year old captioned the photo: “Happy Wednesday. Rose’s face cracks me up… I think this will be my new screensaver.”

Stacey went on to assure her 4.8 million followers that her older sons, Zachary, 13, and Leighton, nine, were her lock screen, and insisted that she doesn’t love Rex and Rose more than them.

“We all know Zachy’s my favourite”, she added with a laughing cry emoji.

While Stacey already has a lot on her plate being a mum of four,she’s also renovating parts of Pickle Cottage.

The 32 year old presenter and influencer is currently having her living room renovated, and took to Instagram to give everyone an update. Prior to work being done, the living room had old-fashioned carpets throughout, the wooden beams had been painted black and it had huge frilly floral curtains.

The carpet has since been torn out and replaced with hard flooring, and all the beams have been painted a bright white.

Finishing off the room, Stacey announced on Tuesday 9 November that the builders had finally started on one of the room’s centrepieces — the fireplace.