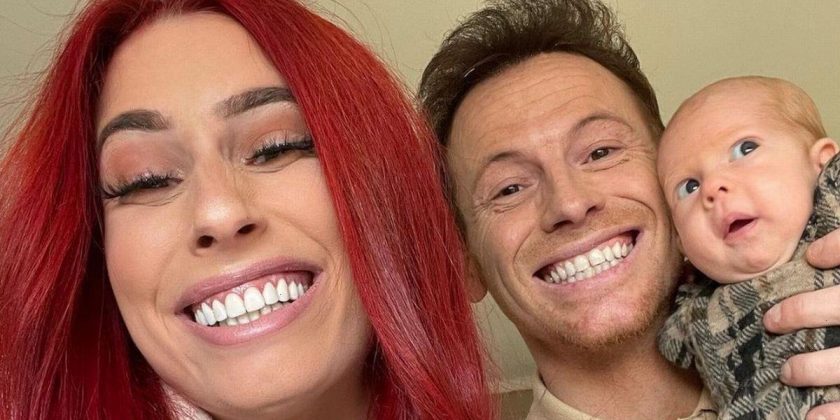 Stacey Solomon has broken her silence over Joe Swash's stag do in Ibiza with a post gushing over her fiancé.

The star had been noticeably quiet in recent days as photos of his summer stag do made headlines, with some speculating that Stacey was worried over her partner's long nights of partying.

But the Loose Women star has now set the record straight, saying that she hopes her husband-to-be is having the best time, and that he is "the best dad ever".

Posting a couple of screenshots of video calls with Joe, Stacey and their youngest child, Rose, could be seen grinning as Joe smiles back at them.

Writing alongside the photos, Stacey said: "Hope you're having the best time with your best friends going out until silly o'clock in the morning and sleeping in until the afternoon…

"You deserve it. The best dad ever who rarely gets the chance to ever do this because we are raising a family. Go for your life bubs.

"I love you, can't wait to marry you," followed by a heart emoji.

At the bottom of the post, she added: "PS Look after Dad," with a laughing emoji – as Stacey's dad David has joined Joe on his stag do, along with actor Dean Gaffney and comedian Rob Beckett.

Before they headed off to Ibiza, Stacey had said to Joe that she was "worried" about him going, and that her "anxiety is through the roof".

In the video, Stacey said to Joe: “I’m actually so worried about you going," to which he replied: “Don’t worry about me, worry about your dad,” as fans learned that the Loose Women star's father was coming along.

Stacey added another caption which read: “MY ANXIETY IS THROUGH THE ROOF! JOE AND MY DAD ON A STAG WEEKEND! PRAY FOR ME…”

But Joe was seemingly right to tell Stacey to worry more about her dad – as he has stolen the limelight from Joe on his stag do.

David has been called a "liability" since heading on the stag do together, with him being pictured with swarms of women seemingly enjoying his company over in Ibiza.

In a clip uploaded by Rob, the comedian asked: “Joe who’s the liability on your stag?” to which Joe replied: “Oh have a look,” before the camera panned onto Stacey’s dad David surrounded by four gorgeous women as he chatted away.

But that wasn’t the only time he could be seen enjoying female attention as while the group of lads watched the sunset in a busy bar on the island, David could be seen with a blonde lady on his lap as he attempted to get a time lapse of the sunset.

Filming the sun going down as David chatted to the woman, Rob joked: “Never has a man cared less about a time lapse. Look at him, couldn’t give a sh*t – he’s loving life!”

He then posted a snap of the pair in conversation and captioned it: “It would be romantic if there wasn’t a 45-year age gap!”