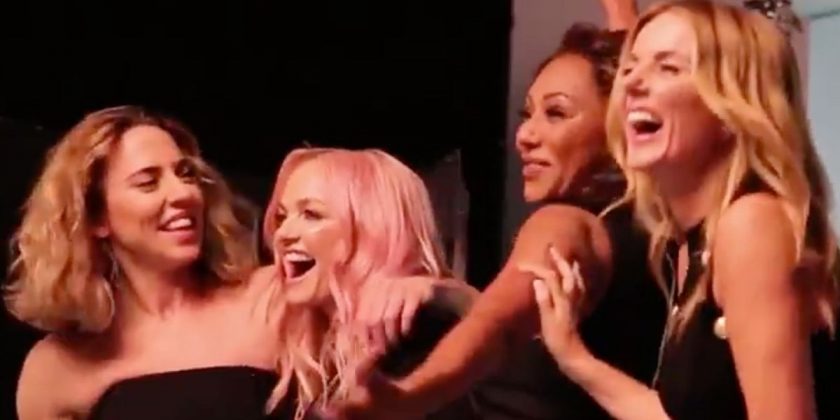 With just a few short weeks before the Spice Girls tour kicks off, the foursome have shared a joyful behind-the-scenes video of their official reunion announcement.

Mel B, Mel C, Emma Bunton and Geri Halliwell – now known as her married name, Geri Horner – posed for a number of photoshoots back when they were gearing up to reveal their big reunion, and luckily their team caught all their excitement on camera.

The Spice Girls’ official Twitter account shared the sweet video ahead of the first tour date in Liverpool on January 12 2019, captioning it: "Soooo here’s the story from A-Z . Behind the scenes."

Over the refrains of the band’s 1996 hit debut single Wannabe, clips of the foursome laughing together and joking around on set showed their joy at being back together again.

Mel B – also known as Scary Spice in the band’s heyday – stood with her arms outstretched in a bid to make the others laugh, while Emma could be seen chatting and smiling with a makeup artist.

Geri, wearing a gorgeous blue sequinned mini-dress, danced in the mirror, while Mel C laughed uproariously at something Emma said.

It comes just days after Mel B was rushed to hospital having severed her own hand .

She revealed she’d needed a three-hour emergency operation to reattach her hand, having suffered broken ribs in a mystery accident.

A pal of the singer later insisted Mel’s injuries weren’t caused by drink or drugs , which she’s used in the past, but were the result of a freak accident

"She lost her footing, slipped and cut her hand on some framed glass picture frames," said the friend.

"Mel is totally in control at the moment because she has to regularly take stringent drug and alcohol tests as part of her custody battle."

They went on: "This was her 15th drug and alcohol test and she has cleared them all.

"She’s not going to accept any sort of slur on her reputation because Stephen [Belafonte, her ex-husband] wants to try and make her look bad. The results are there to see in black and white."

The other Spice Girls rushed to her hospital bed to keep her company, but concern quickly turned to humour as they mocked her injuries in an Instagram post.