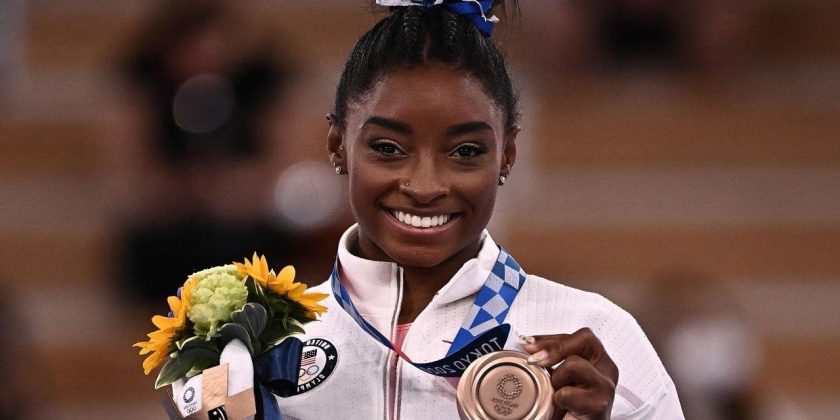 Though her experience at the 2021 Tokyo Olympics wasn’t what anyone expected, Simone Biles says she has no regrets.

“I believe everything happens for a reason, so I wouldn’t take it back for the world,” the gymnastics legend tells ET’s Nischelle Turner. Biles and her U.S. Gymnastics teammates — MyKayla Skinner, Jade Carey, Grace McCallum and Jordan Chiles — reunited over Zoom on Wednesday, ahead of their upcoming Gold Over America Tour, where fans will get to see them showcase the skills that earned “The Fighting Four” a total of six medals in Tokyo, including a team silver.

“We had to quarantine a little bit at the beginning, and throughout the whole entire process all we had was each other, so that made us a stronger team,” Biles recalls of the unique Olympics experience this year, “as well as [in the] team final, kind of having to switch out, it was quite a meet.”

“Quite a meet” is a bit of an understatement. Despite entering the Tokyo Games as a gold medal favorite in nearly every event, Biles walked away with just her team silver and a bronze on the balance beam. She made the difficult decision to withdraw herself from the team competition, the all-around and the rest of her individual events for her own mental health, and after coming down with a case of what gymnasts refer to as “the twisties,” which causes them to lose their position in the air on complex jumps and can lead to devastating injury.

On the biggest stage in the world, with one of the biggest targets in Olympic history on her back, it had to have been an agonizing decision. But it’s one Biles says she remains “content” with.

“Obviously there are still a lot of feels and emotions behind it, but as far as my Olympic experience goes, it was very unique and there is nothing like it,” she says. “I believe everything happens for a reason, so I wouldn’t take it back for the world.” 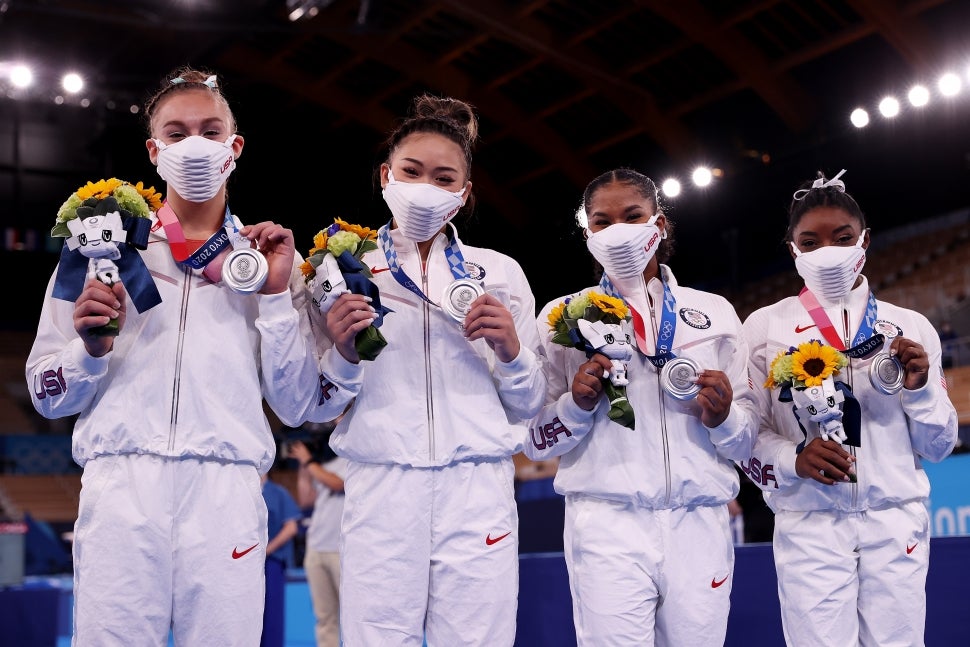 In fact, Biles adds, her withdrawal allowed her to see an entirely different side of the Olympic Games — and support her teammates in a new way.

“We even got to interact with the boys,” she recalls of cheering on Team USA from the sidelines. “Usually I am not in the stands, but I got to be, so I got to experience the Olympics in a different way.”

“I wasn’t in the right head space to compete, so I can’t be mad,” she adds. “I made the safest decision and it took a lot of courage.”

Biles also had the support of her teammates, who stepped up to win the team silver in her absence, with McCallum and Chiles competing in all four events during the team final.

“I think in the moment we were all I think pretty stressed out, and we felt a lot of pressure, but when Simone came over to us and just told us we got it and she knew we could do it, that gave us a sense of peace,” McCallum recalls, noting that she was close to nervous tears before leading off on the uneven bars. “I knew that my routine kind of set the mood for the rest of the meet. I was like, ‘I have to hit this routine, I really want these girls to do well.’ So yeah, I felt a lot of pressure, but I was also like, I can do it. I got it.”

“It is pretty hard to explain, because I just feel like it all happened so fast,” Carey says of her Olympic experience. “You kind of just– yeah, you had to be there.”

Biles’ withdrawal also led to an unexpected opportunity for Skinner, who, after serving as the team alternate at the 2016 Games in Rio — and a “roller coaster” of ups and downs in her personal and professional life in the years since — was prepared to go home once again without competing in a final. But she made the most of her teammate’s vacated spot in the vault final and earned herself a silver medal.

“After 2016, being the alternate, I was kind of ready to be done in the elite world,” she admits. “It was really nice to regain my love for the sport… Words can’t even describe how happy I am.”

“I am just so grateful for this opportunity, and for all of the girls, and for Simone for helping me every step of the way,” Skinner adds. “Being able to compete in the Olympic Games was better than just sitting back in the stands, and it was so fun to be able to cheer on my girls and just to relive a moment, a dream that I have dreamed of ever since I was a little girl. So it was definitely worth it.” 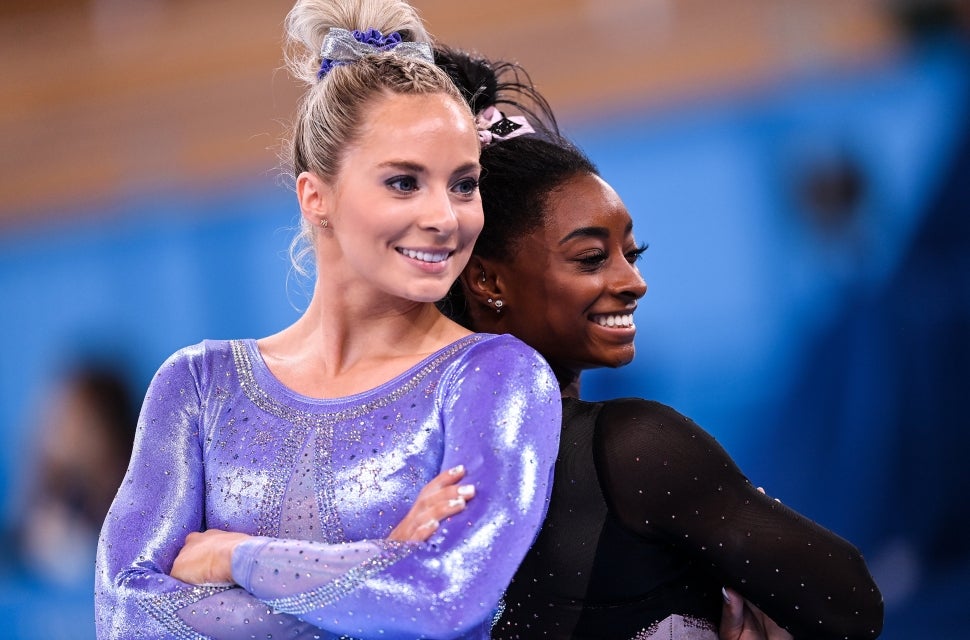 In addition to love from her friends, family and teammates, Biles received an outpouring of support from A-list fans like Kerry Washington, Taylor Swift, and even the Obamas. She tweeted that Swift’s narration of a special promo for her balance beam final — where she took home a bronze that meant just as much as any of her golds — left her in tears.

And Biles wasn’t the only one with A-list fans sending their support. Chiles recalls for ET how she woke up at 4 a.m. Tokyo time to see a message from one of her favorite performers!

“I thought I was just seeing things in my DMs, and it said Normani, and I was like, I’m a little confused, this is crazy!” she shares. “She had messaged me and was like, ‘Congrats, you’re doing so good!’ and then she ended up following me and there was this whole long thing that just went on, it’s amazing. I love her so much, I’m still in shock.”

Despite Biles’ unexpected results in Tokyo, she says she’s keeping her options open when it comes to future Olympics — the next Summer Games are set to take place in Paris, France, in 2024. But she’s glad she was able to be there for her fellow gymnasts during this unique Olympic experience. “To be on such a big stage after COVID and all of that, I felt like they just needed a little bit of guidance and to know they weren’t alone,” she explains.

As for her advice to her teammates on their newly-upped notoriety?

“I would just say be smart, especially on social media, because that can play a huge role for the rest of our careers,” she notes smartly. “But just have fun, capitalize on your success and just go out there– I mean, you guys are Olympic medalists, so it’s awesome.”

Fans will get another chance to see the Team USA gymnasts on their upcoming tour — where they’ll showcase their talents alongside other great gymnasts like Rio medalist Laurie Hernandez and UCLA standout Katelyn Ohashi. For Carey, however, it will be one of the first times she’s performed without her coach and father, Brian, by her side.

“It’ll be like, I feel like the longest time I’ve ever been away from him in my life,” she says, assuring with a smile, “It’ll be OK.”

The Gold Over America Tour kicks off Sept. 21 at the Tucson Arena in Tucson, Arizona. Click here for tickets, and tune in to Entertainment Tonight on Thursday for more from Biles and her teammates. Check local listings here.