Simone Biles has opened up after the U.S. Gymnastics team had an uncharacteristically rocky start during the qualifying round at the Tokyo Olympics.

The Simone Biles-led women’s gymnastics team team are not at the top of the Olympics leaderboard for the first time in over a decade. Team USA made a few uncharacteristically sloppy errors during the qualifying round at the Ariake Gymnastics Centre, allowing Russia to take a 1.067 point lead over the U.S. Both Simone and Grace McCallum stepped out of bounds, with Simone taking a step off the mat on her vault landing.

“I feel we did a pretty good job. Obviously, there are little things we need to work on, so we’ll go back and practice and work on that, just so we can do our best performance at team finals because that’s what matters,” Biles said, per People. “We’re really striving for top three [finish].” Team USA’s high-performance team coordinator, Tom Forster, added, “We had great performances today and some not-so-great ones, but the errors we made are mental. These girls have been training incredibly well, so it’s things we have some time to work on before finals, and we’ll do it.”

When asked about Simone’s small errors, he said, “That was a surprise. She’s been incredibly consistent and I’m sure she feels bad, but I’m super proud of the way she trained. She’s been a great leader for us. Sometimes, just like in other sports, great athletes drop the ball in the end zone or a quarterback throws an interception. It happens. Those steps are mental errors.” He also said that coming in second could be a “great awakening” for the team. 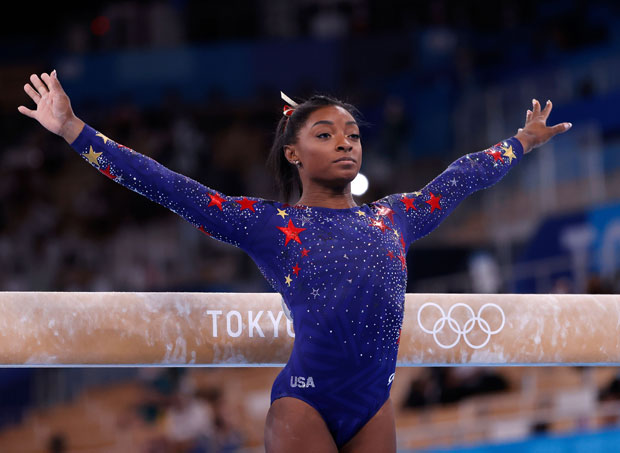 It came just a couple of days after the team opted out of attending the July 23 Opening Ceremony. The team felt it was more important to be “focused on preparation” rather than walk in the ceremony, a U.S.A. Gymnastics spokesperson told The New York Times. Simone did a short Q&A with fans on her Instagram story and revealed there were multiple reasons that the Team USA gymnasts were forgoing the ceremony.

Coach Cecile Landi also wrote on Twitter, “It was also a decision that we all made together, we know it isn’t ideal for the Olympic experience but nothing is ideal during a pandemic. We feel like we can control the athletes and our safety better in a hotel setting!”