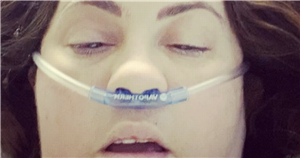 Selena Gomez’s mum was told that she had 'days to live' after she was diagnosed with 'double pneumonia'.

Mandy Teefey revealed in a set of photos shared on Instagram the harrowing time she spent in hospital a few weeks ago after being told that she would most likely not make it from her illness.

The 45 year old decided to share this personal news with her followers after comments were cruelly made about her weight after she was featured on the cover of Entrepreneur magazine with her famous daughter.

Mandy explained on social media that she gained 60lbs in relation to being sick, due to inflammation from infection, and was discharged later in a lucky turn of event thanks to her “miracle” doctors.

“I wasn’t ever going to discuss this, but I knew when the Entrepreneur cover came out comments on my weight were going to be DM’d to me,” she captioned.

"I just posted a polite offer instead of the name calling. But, I was out of the hospital for maybe 3 1/2 weeks from double pneumonia. I was told I had days to live.

“I had miracle Drs and love from my family and friends to keep me going. I fought. The Drs fought and I was one of the few who made it out.”

In the first photo posted of herself, Mandy is seen wearing an oxygen nasal tube and in the second image she is lying on a hospital bed in a patient’s gown on the day of her release.

Mandy is a continuous advocate for supporting mental health after suffering with her own psychological problems for years and so these recent remarks may have proved particularly difficult to receive.

The mother of two was inundated with praise after opening up about her traumatic health experience.

“Mandy you are such a strong woman, thank you for being this honest even tho you didn’t owe it to anyone, keep kicking some a**!!” wrote one follower.

“You are a fighter Mandy! I know you'll get out of this. Thanks for inspiring us all,” commented a second inspired fan.

"You don’t owe ANYBODY an explanation! But thank you for sharing this Mandy,” added another.

“I had no idea you were going through something like this. Wishing you the absolute best. You’re an inspiration. Also, you look gorgeous in the photoshoot!!!!!!!!!!"

To get the latest showbiz and celebrity news straight to your inbox, sign up to OK!'s daily newsletter.