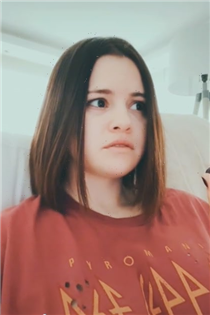 Back in 2017, Selena Gomez received a kidney transplant from her best friend, Francia Raisa.

Selena has battled lupus and other health issues, and she’s been remarkably candid about her struggles.

Unfortunately, one of the downsides to dealing with health issues as a public figure is that random social media commenters see fit to comment on every decision that pertains to your physical being.

And that’s the obnoxious tendency that Selena was confronted by earlier this week.

If you follow her on TikTok, then you know that Selena’s content is as funny as just about any other celeb’s on the site.

Her humor is often self-deprecating, and she’s been known to poke fun at the details of both her public image and her private life.

So when Selena made a video in which she joked about her excessive drinking, most of her fans knew not to take the clip seriously.

Unfortunately, it only takes a handful of haters to spoil the fun, and the Debbie Downers were quick to zero in on Selena’s latest post.

The clip shows Selena reacting to healthy alcohol consumption guidelines laid out by a doctor,

“The [Centers for Disease Control and Prevention] defines heavy drinking as 15 or more drinks a week for men and eight or more drinks per week for women,” the doctor says.

Selena cringes and grimaces throughout the clip, implying that she consumes far more than 15 drinks a week.

She captioned the post, “It’s a joke,” but that still didn’t stop the scolds from wagging a stern finger in her direction.

“So one of your best friends gives you her kidney and you continue to drink excessively. Damn selena,” one person commented.

Not content to allow a random stranger to chide her about something so serious, Gomez was quick to reply.

“It was a joke ass,” the singer wrote.

Selena first shared the news of her kidney transplant during her recovery several years ago.

“I’m very aware some of my fans had noticed I was laying low for part of the summer and questioning why I wasn’t promoting my new music, which I was extremely proud of,” Gomez wrote on Instagram at the time.

“So I found out I needed to get a kidney transplant due to my Lupus and was recovering,” she continued.

From there, Selena expressed her gratitude to Raisa, who gave her the ultimate gift in the form of a kidney donation.

“There aren’t words to describe how I can possibly thank my beautiful friend Francia Raisa,” Gomez wrote.

“She gave me the ultimate gift and sacrifice by donating her kidney to me. I am incredibly blessed. I love you so much sis.”

Over the years, rumors of Selena’s heavy drinking have circulated on social media, but the 29-year-old has never felt obligated to address them, which is entirely her right.

Fans have alleged that Gomez and Raisa had a falling out over the former’s alcohol consumption, but that doesn’t appear to be the case.

In fact, there’s no real indication that Selena has a problem with booze, but there’s at least one sign that she doesn’t:

If she was trying to hide a drinking problem, she probably wouldn’t joke about her heavy drinking in a public forum!