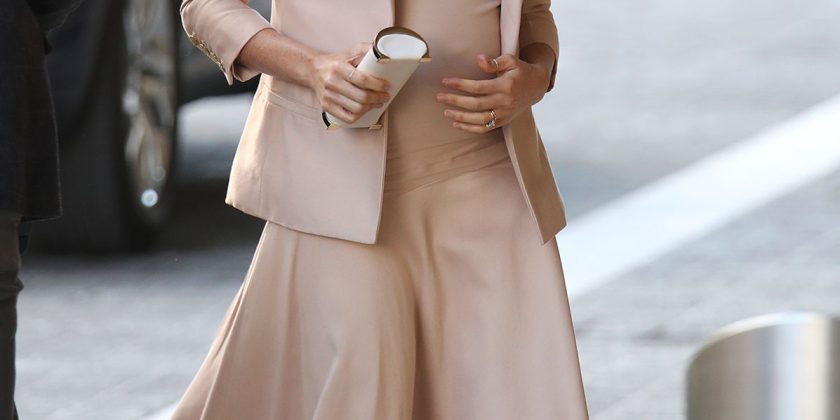 The Duchess of Sussex arrived to her first public outing to the National Theatre in London on Wednesday – three weeks after it was announced she had adopted it as one of her initial four royal patronages – in a very familiar pair of strappy heels. The beige pointed-toe shoes are her Aquazzura Matilde crisscross pumps, which she’s worn on several special occasions – including on the day she publicly announced her royal engagement to Prince Harry in the Sunken Gardens of Kensington Palace back in Nov. 2017.

The royal mom-to-be, 37, also previously sported the heels in a photoshoot for Vanity Fair U.K. which honored her philanthropic work.

And Meghan’s not the only member of the royal family who is a fan of the shoes – Princess Eugenie chose the pumps to attend an event to mark the late Nelson Mandela’s 100th birthday in July. The 28-year-old fellow newlywed stunned in a green Osman dress with an asymmetrical cut and the Aquazzura heels.

RELATED: Everything You Need to Copy Meghan Markle’s Chic Style

The Duchess of Sussex is a longtime fan of Aquazzura, even chosing the brand to wear at her royal wedding — Meghan chose a satin pair of the brand’s pumps complete with blue soles (possibly her something blue!) for her second wedding look at the Frogmore House on the Windsor Estate. She paired the satin heels with a stunning white Stella McCartney gown and an aquamarine emerald-cut ring that belonged to the late Princess Diana.

But Meghan’s shoes weren’t her only royal rewear on Wednesday. She also recycled the Metropolitan Insignia clutch from Carolina Herrera, which she previously used at Trooping the Colour last summer.

The former Suits star arrived at the National Theatre in a monochrome look, pairing a beige blazer with a V-neck dress by Brandon Maxwell.

She began Wednesday’s visit by joining a workshop with members of the Pericles company, which was the National Theatre’s first Public Acts production – uniting people from the community in London with professional actors to create a new musical version of the Shakespeare play.

Meghan then met current and former apprentices who are working as technicians in various departments, including carpentry, metalwork and painting. She also caught a performance inspired by the play War Horse by primary school children.

The Duchess of Sussex “is a strong believer in using the arts to bring people from different backgrounds and communities together, and this first official visit to The National Theatre will explore the work they do, as well as meeting some of the talented teams and apprentices working behind the scenes,” her office said in a statement.