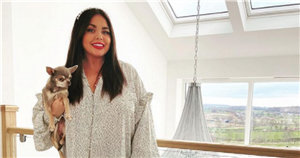 Scarlett Moffatt has revealed she's making a documentary about tic disorders after suffering from Bell's palsy as a child.

Bell's palsy is a temporary weakness or lack of movement affecting one side of the face, and treatment includes a course of steroids, eyedrops and eye ointment. It is not preventable and is thought to be caused by an infection.

The 31 year old, who recently stunned in a sequinned feathered mini dress as she posed with her boyfriend, is now set to front a Channel 4 show that will try to answer why medics have seen an increase in the number of teenagers with Tourette’s syndrome and tic disorders.

According to The Sun, the Gogglebox star will travel around the UK to meet scientists, Tourette's TikTok influencers, charity campaigners and neurologists.

“This is something I feel incredibly passionate about as I suffered with facial tics when diagnosed with Bell’s palsy as a child," Scarlett explained to the publication.

Scarlett, who recently said she wanted to cry after spending Christmas with her boyfriend, continued: “I wish there was this kind of information and education available back then, as it’s something so many young people have to deal with.”

It comes after Scarlett spoke out on her New Year resolutions for 2022, vowing to embrace her body in an Instagram post.

The TV personality shared her resolutions in an inspiring post which included accepting her “boob gap”, as well as spending more time at home and taking up dancing again as she says “it fills my heart with joy”.

Sharing a photo of herself and boyfriend Scott Dobinson at their home, she began listing her plans for next year.

Scarlett wrote: “My New Year’s resolutions are to spend more time at home.”

She went on: “Being self-employed I am so grateful and thank my lucky stars every day for my job. So I’ll do this by ensuring I always have at least six days off a month.”

The I’m A Celebrity…Get Me Out of Here! star also shared a mirror selfie she’s posted in the past that shows her wearing a black low cut jumpsuit that shows off her cleavage.

Continuing her list, she wrote: “Embrace my body more. That includes my boob gap. I’m also going to start dancing again as it’s something that fills my heart with joy,” alongside a purple heart emoji.

“And to do dry January. It’s been a crazy year where I’ve probably drank more than usual and I’m ready for a bit of a detox January," she went on. "Also me and @scottdobby now we are settle are going to post more on our House account @ourbonniebarn.”

For all your updates on Scarlett Moffatt, sign up to our daily OK! newsletter.