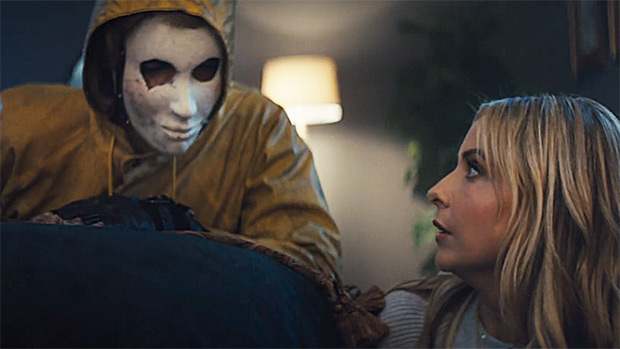 Buffy the Vampire Slayer star Sarah Michelle Gellar, 41, returns to her scream queen days in Olay’s amazing Super Bowl LIII commercial, during which she can be seen hiding in her house from a masked killer! Watching the faux film, titled “Killer Skin”, reminded us of the days when Sarah used to run from murderers in movies like The Grudge, I Know What You Did Last Summer and Scream 2 — three of our ultimate favorites when it comes to horror movies — so it gave us all the feels upon watching it for the very first time.

As Sarah runs from the masked man in the new commercial, she runs into an issue while trying open the Face ID on her phone so she can call 911. “It won’t recognize my face,” she says to her onscreen boyfriend. “I’ve been using Olay! It has totally transformed my skin. 28 days ago, I Iooked like that,” pointing to an extremely unattractive photo of herself. (Yikes!) “That’s bananas!” her boyfriend says, sharing our own sentiments.

But despite the hiccup, the masked man doesn’t kill her. In fact, when he enters the room, he compliments her and says, “Your skin is glowing. You could be a movie star!” Pretty hilarious twist, right?

Before the commercial aired, Sarah told Adweek, “I thought the concept was really fun and just such a great twist. All you ever want to do in your life as an actor is have these moments that people remember. When I read this, I thought, ‘Oh, my god, this is going to be the kind of commercial that people remember and talk about the next day.’”