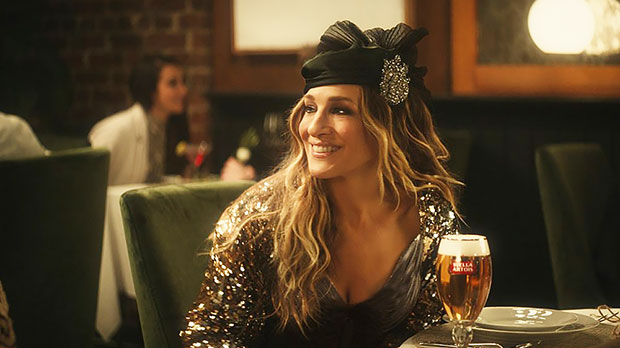 I started to wonder: is Super Bowl 2019 going to be remembered as the year with the best commercials of all-time? Maybe so, if Stella Artois’ ad that unites two of pop cultures most iconic characters is any indication. Watch as Carrie Bradshaw meets The Dude for a drink!

Perhaps there are no two characters more revered from the 90s than Sex & The City‘s Carrie Bradshaw and The Big Lebowski’s Jeff “The Dude” Lebowski. So while it might sound like a joke when I say, “Sarah Jessica Parker and Jeff Bridges walk into a bar…”, that’s actually the reality of Stella Artois’ Super Bowl commercial, with both channeling the roles that made them superstars. The ad is part of the “Pour it Forward” campaign launched by Water.org, a non-profit cofounded by Matt Damon, but neither Carrie or The Dude are interested in having a glass of water right now.

Strolling into a swanky bar looking as glamorous as ever, Carrie finds herself a table and is greeted by an excited and friendly waiter, who is ready to have a cosmopolitan brought over immediately. However, the entire staff is stopped short when instead of her drink of choice, she asks for a Stella. Plates are dropped, drinks and jaws drop, but Carrie seems more than happy with her choice as a perfectly pour Stella is brought to her table. As if the world doesn’t seem crazy enough, in walks The Dude, who strolls up to the bar as only Lebowski can. He looks right at the bartender and asks for, you guessed it, a Stella — not a White Russian. THE MADNESS.

With both enjoying their drinks at hand, the pair share a toast, bringing to a close a several week tease of the return of these characters. SJP had released a trailer for the commercial on her Instagram, recreating the opening to Sex & The City, sharing with her fans how excited she was to be revisiting a ‘beloved character’. Jeff did the same, though his teaser was simply a tiny glimpse of his cameo in the commercial.

Revisiting a beloved character. Briefly and with a twist. Because, thanks to @stellaartois, when you change up the usual you can do good. X, SJ #Ad #PourItForward

Revisiting a beloved character. Briefly and with a twist. Because, thanks to @stellaartois, when you change up the usual you can do good. X, SJ #Ad #PourItForward

Watch the ad above and make sure to stick with HollywoodLife to watch all the best commercials from this year’s Super Bowl!