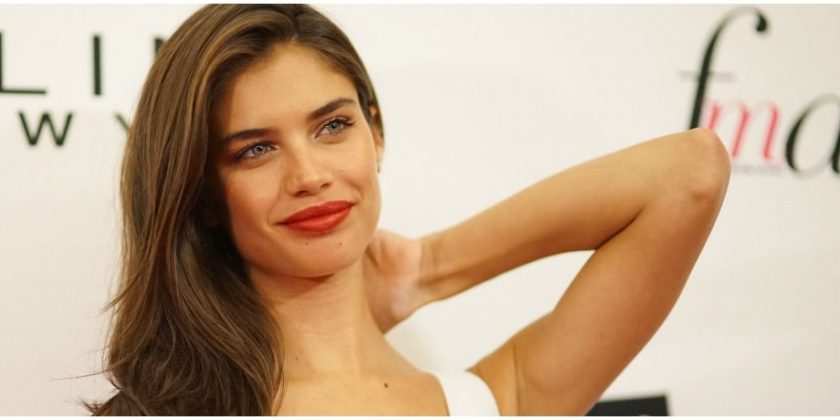 Victoria’s Secret angel Sara Sampaio is well-known for flaunting her enviable figure but every photograph that she posts on Instagram, it instantly becomes a hit among her fans, which shows that she doesn’t necessarily need to show skin to leave people jaw-dropped in admiration.

The 27-year-old model recently treated her 7.3 million fans to a new picture wherein she is featured flashing her beautiful, signature smile while looking away from the camera. Sara kept a hand on her cheek, wore a black t-shirt and wore her beautiful tresses down. In the caption, Sara asked everyone how they are doing on Monday and within an hour of going live, the picture racked up more than 119,000 likes and close to 700 comments wherein fans and followers showered Sara with various compliments. One person wrote that whenever he sees Sara’s pictures, his day brightens up immediately, while another male fan wrote that his day was “so, so, but it is much better after seeing Sara’s smile.”

Other fans, per usual, expressed their admiration for the Portuguese hottie by using countless hearts and kisses emojis and using words and phrases like “goddess,” “outstanding beauty,” “amazing smile,” and “the most beautiful Victoria’s Secret angel.”

How are you guys feeling today? ❤️

Prior to posting the current snap, Sara participated in the ongoing #10YearChallenge trend on social media and posted two of her risque pics — one current and one which was captured 10 years ago — wherein she is featured posing naked while sitting on a bed and loosely draping the sheets around her body.

In both the pictures, Sara put her bare back on full display which sent temperatures instantly soaring. The snaps were favorited 530,000 times and gathered more than 2,000 comments where, as the Inquisitr earlier reported, fans asked the model to share her beauty secrets with everyone. However, Sara has not kept any secrets when it comes to her beauty. In fact, Sara appeared in Elle magazine’s “Waking Up With” segment, where different celebrities are featured to reveal their everyday morning routines and beauty regimens.

The model revealed that she doesn’t like to use fragrant products on her skin so she applies the rose and bilberry toning gel from the Organic Pharmacy on her skin after washing her face in the morning, followed by Cicalfate Repair Cream from Avene. Regarding the product, she said the following.

“[The cream] has been saving my skin from all the makeup and [after using it], it feels like my skin is back to how it was in my teenage years when I didn’t wear makeup.”

She also said that she applies Moroccan oil to the ends of her hair every day in order to make it shiny, smooth and easily manageable.