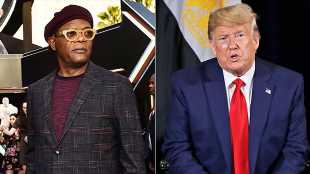 Donald Trump claims he deserves the Nobel Prize ‘for a lot of things,’ but Samuel L. Jackson says he just threatened to start a war last week and called him the ‘Putz in Chief.’

President Donald Trump said on Sept. 20 that he should get a Nobel Prize but that he likely won’t cause the system is rigged. The comment came when he was meeting with Pakistani Prime Minister Imran Khan in New York ahead of the U.N. General Assembly after Trump declared that he was “ready, willing and able” to negotiate peace talks between India and Pakistan over the territory of Kashmir. When a Pakistani journalist told Trump, “If you can solve this outstanding issue of Kashmir, very likely and definitely you’ll be deserving a Nobel Prize,” the president agreed. But actor Samuel L. Jackson definitely did not.

“I think I’m going to get a Nobel Prize for a lot of things, if they gave it out fairly, which they don’t,” Trump told the reporter, adding “They gave one to Obama immediately after his ascent to the presidency, and he had no idea why he got it. You know what, that was the only thing I agreed with him on.” President Barack Obama won the prize in 2009 during his first year in the White House.

Samuel L. Jackson tweeted out “Nobel Peace Prize…Putz In Chief??? Muthafukkah just threatened to start a War!!! But, that was last week’s feels…ok!!” and he’s right. Trump threatened war with Iran on Saudi Arabia’s behalf last week of it was proven the country was behind the drone attacks on Saudi oil production facilities. Many others agreed with Samuel. One person wrote, “Sam, they give so many Nobel Prizes out to leaders who build Kiddie Koncentration Kamps!” referring to his administration’s policy of separating migrant children from their parents at the border and warehousing them in detention facilities, with some in cage-like structures.

“I was just thinking the same, for what?? What has he done other than be corrupt, ruthless, dishonest…the list goes on #PulitzerPrizeMyAss,” another person added under the actor’s comment. One person noted, “If Obama hadn’t won this honor Trump wouldn’t care about it at all. The sense-of-self of this man is beyond unhealthy.”