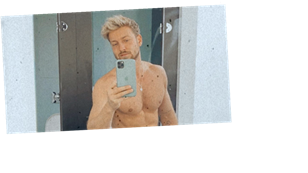 Sam Thompson has revealed he has lost weight, following his rumoured split from Zara McDermott.

The Made in Chelsea star, 27, posed topless in front of a mirror in the snap, which he posted to his Instagram story, where he made the admission.

Sam appears to be standing in front of two toilet cubicles as he went shirtless to show off his toned body.

He gave a small smile at the camera, after breaking his silence following news of his breakup, while he wore a pair of grey jogging bottoms and a silver necklace.

MIC star Sam looked to the future as he wrote above the snap: “Lost a bit of weight but new week new goals!”

In a bid to gain back the weight he had lost following his reported heartbreak, Sam posted a photo of his meal which consisted of mushrooms, tomatoes, salmon and rice.

As he posted the snap on his Instagram story, Sam explained to his fans: “Not pretty but my go to meal for putting on size,” followed by an upside down face emoji.

Sam’s snaps come after he and Zara, who are reportedly in crisis talks, are rumoured to have broken up after 18 months of dating.

The reality star is said to have called time on their romance after he discovered Zara’s alleged cheating during her time on The X Factor: Celebrity last year.

A source said of her reported unfaithfulness: “Zara cheated on Sam with someone in the music industry. Someone connected to the X Factor.

“Sam is obviously distraught about this. He only found out about it very recently and has escaped for a few days.

“Zara regrets it and feels terrible. She knows it was a huge mistake and is extremely upset,” the insider continued to tell Mail Online.

Before the couple’s split hit the headlines, Sam’s sister Louise Thompson posted a string of cryptic tweets about infidelity.

She wrote to her 519,000 followers: "Cheaters always want you to be loyal while they're being unfaithful".

A few days later she added another post, which read: "Trust takes years to build, seconds to break, and forever to repair" followed by "I'm proud of my heart. It's been played, stabbed, cheated, burned and broken… somehow still works."

The tweets had originally caused fans to worry about Louise’s relationship with her fiance Ryan Libbey, but fans are now speculating that the tweets were aimed at Zara and Sam’s romance.