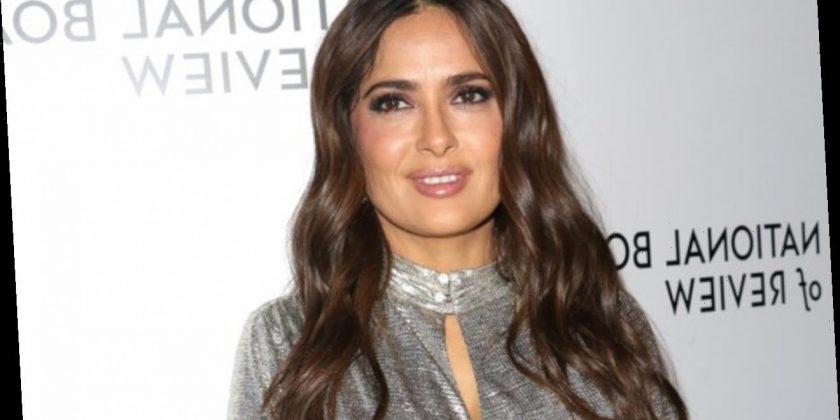 The 54-year-old actress shows off her body inks with a behind-the-scenes photo from her upcoming sci-fi film, ‘Bliss’, in which she stars along with Owen Wilson.

AceShowbiz –Salma Hayek has debuted new tattoos. Ahead of the release of her new movie “Bliss“, the American-Mexican actress took to social media to show off her faux floral breast body arts in which she got for her new sci-fi film.

Making use of Instagram on Thursday, February 4, the 54-year-old star shared a picture of her sitting on the makeup chair as she smiled for the camera. The snap saw her wearing glasses and a white off-the-shoulder robe while putting her sunflower tattoo and another type of floral piece on display.

In the caption of the post, the former “30 Rock” star wrote, “the middle of a #makeup #hair and #tattoo test for ‘Bliss’. Coming out tomorrow on @amazonprimevideo world wide.” She also added a Spanish version, adding the hashtags that read, “#amazonprime and #tbt.”

While Salma’s tattoos were temporary, many of her fans claimed that they suit her well. One user gushed, “tattoos go with you!! have you ever thought of actually getting one?” Another individual raved, “even though it’s not real! That’s awesome artistry!” A third additionally exclaimed, “Absolutely brilliant.”

Salma appeared to have been in a throwback mood before the release of her new movie. A few days prior, she posted on Instagram a snap of herself posing in a black one-piece bathing suit. Speaking of the image on Fox 5’s “Good Day New York“, she revealed, “Unfortunately it wasn’t yesterday.”

“It was the middle of December when I was working out and dieting for the new year and then it came and back in confinement, and then I ate again,” the wife of Francois-Henri Pinault added. “So it’s not like it was from three years ago but it feels like three years ago.”

In the film “Bliss”, Salma portrayed a woman named Isabel who tried to convince Owen Wilson‘s Greg that he is living in a simulation. The movie, which was written and directed by Mike Cahill, premiered on Friday, February 5 on Amazon.