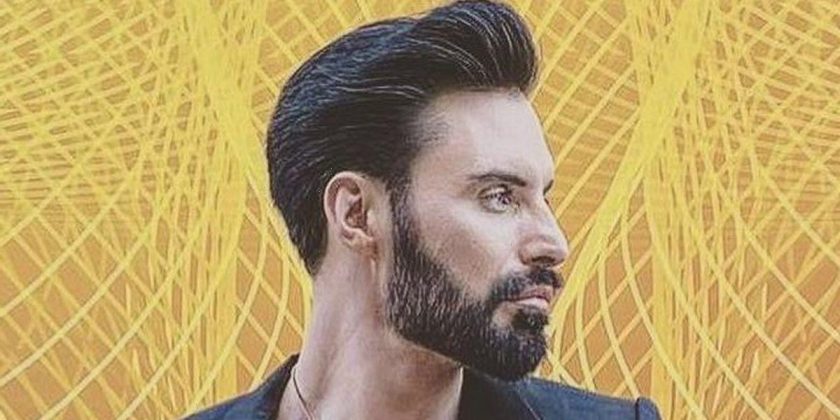 Rylan Clark has sneakily revealed he has got a new tattoo on his chest as he poses for a selfie outside the Eurovision Song Contest 2022.

The TV presenter, 33, is hosting the contest’s BBC coverage with Radio 1 DJ Scott Mills at the Pala Alpitour in Turin, Italy.

The cheeky duo have been entertaining viewers of the competition with their hilarious commentary and banter.

In a cosy selfie posted on social media, the hosts celebrated the first semi-final round being completed on Tuesday.

A new unseen tattoo peaked out from under Rylan’s incredible plunging necklace. He wore a black blazer with statement cape-like open sleeves and a mandarin collar.

The ensemble, which was hand-made by Great British Sewing Bee 2021 finalist Raph Dilham, was paired with a chunky metallic gold belt and high-waisted trousers.

Rylan and Scott Mills have been documenting their time behind the scenes at the Eurovision song contest.

The X Factor alumni is supporting the UK Eurovision act this year, newcomer Sam Ryder, who shot to fame on the video app TikTok.

Rylan revealed to The Sun that he is planning on taking Sam out drinking before the show, and that the singer should prepare for a boozy one.

He said: ““It is tradition that I always take the British act out, normally on the Wednesday or the Thursday, and then the head of delegation always has a go at me because I take them out.

“But I will make sure Sam is all right by Saturday night.”

Rylan is back hosting the competition after being forced to pull out of last year’s show in Rotterdam due to health issues.

Just a month later, the reality star revealed that he had separated from his husband of five and a half years Dan Neal, and that the heartbreak had caused him to have a breakdown and be hospitalised.

The 2020 competition was cancelled due to the coronavirus pandemic.

This will be the first time in three years that Rylan will be providing his hilarious commentary.

The second round of the semi-finals is being held on Thursday, and then the duo will retire to let TV host Graham Norton lead the coverage for the final on Saturday night.

The UK’s entry last year James Newman finished the competition with “nul” point, while the Italian band Maneskin were victorious

For the latest showbiz reports and breaking news, sign up to OK!'s daily newsletter here.