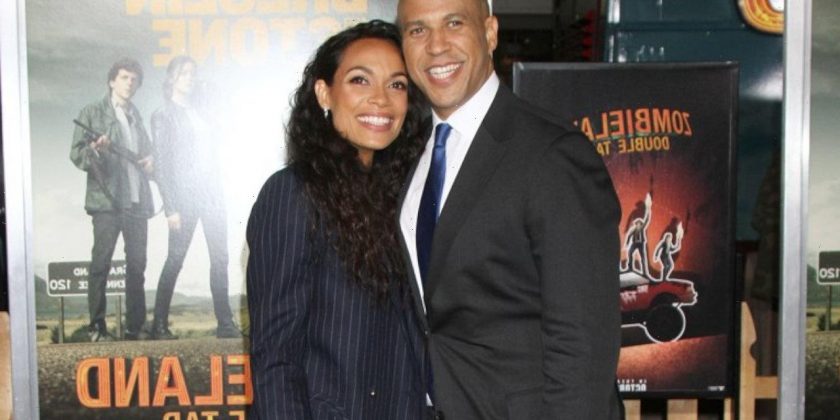 Talking about her road trip across the country with her father to start a life with her senator boyfriend, ‘The Mandalorian’ actress admits that it was a ‘really beautiful’ one.

AceShowbiz –Rosario Dawson has looked back at her journey to start a new life with Cory Booker in New Jersey. Having taken her romantic relationship with her senator boyfriend to the next level in the summer of 2020, “The Mandalorian” star labeled her road trip across the country with her father “an amazing adventure.”

In the latest issue of PEOPLE, the 42-year-old opened up about her moving in with the New Jersey senator, who she has been dating since 2019. She told the publication, “It was an amazing adventure. My family are all in New York. It felt really beautiful and good to start a new chapter of my life in the driver’s seat.”

Rosario made the 3,000-mile trip from California to New Jersey in a 29-ft. RV. The Claire Temple of “Luke Cage” was joined by her father, Greg, who is battling pancreatic cancer, so that they could spend more time together before she settled him in New York City and she moved into Cory’s home in the Central Ward.

The “Zombieland: Double Tap” actress announced her plan to move in with Cory in 2020. At the time, she was forced to go several months without seeing her 51-year-old boyfriend since the height of the COVID-19 pandemic put her in quarantine with her parents. In an interview with Kevin Smith, she explained, “My boyfriend. I haven’t seen him since February. He is by himself, going between Newark and DC.”

Revealing her big plan to move in with Cory, Rosario declared, “I’m actually in the process of moving, by the way. I’m going to New Jersey.” The former “Daredevil” star also shared that her mother will be staying at her place in New York while she resides with her boyfriend. “We were thinking about moving in together anyway, but especially during all of this, it’s been really intense,” she declared, adding she’s “very excited.”

Rosario met Cory at a fundraiser in 2018. She now lives together with her boyfriend in a multifamily home in Newark’s Central Wand. In October 2020, Cory spilled to Buzz Feed, “This is the first time in my life I’ve really lived with somebody, and obviously Rosario and I are enjoying and adjusting to that.”