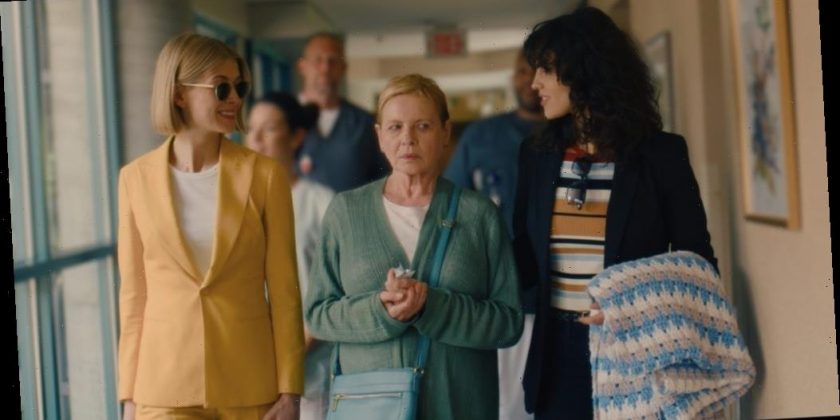 In a surprise win tonight in the Best Actress Comedy Musical category, Rosamund Pike took home the Golden Globe for the Netflix feature I Care a Lot in which she plays Marla, a con artist who swindles the elderly.

Despite being a Netflix movie, and not massively in theaters, Pike said during the Globes virtual backstage “the audience for this film over opening weekend is the closed thing I experienced to the appetite that surrounded Gone Girl. It’s so exciting to see people pass memes and quote lines…around the internet.” Gone Girl, which catapulted Pike to mainstream status, opened to $37.5M stateside in October 2014 and grossed $167.7M domestic, $369.3M WW.

“It’s the closet thing to feeling an audience in a theater and it’s incredible,” said Pike.

Pike found the character “unsavory and delicious” and a “scrappier street fighter” versus her cunning Amy Dunne who stages a disappearance, making her husband a suspect. On how Amy and Marla are similar, Pike said both were “appalling” and that we’re “disinclined to swith them off.”

“When I’m appalled and amazed at the audacity, I lean in,” said the actress who won her first Globe tonight on her third nomination.

“I didn’t know where the script was going when I read it,” she added.

On whether the pic deserved to be in the comedy/musical category, Pike believed it to be so versus drama.

“If we delivered this story on this subject matter in a way that tugged at the heart string and was told from the victim’s point of view, it would be unbearably difficult to watch. We took this subject matter and flipped it. So, yes, we go on this fun, seductive ride, which is fun and funny, but we also get to get angry at the same time. I’m open to the debate whether this is a comedy or not.”