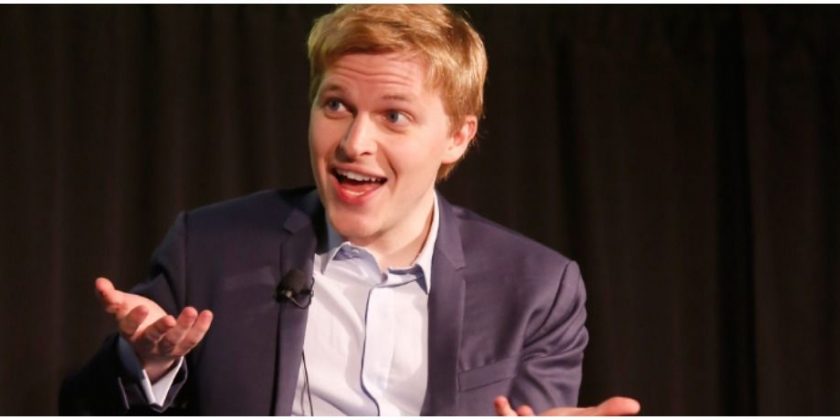 Ronan Farrow celebrated his 31st birthday wearing an adult onesie and a bow tie as evidenced on his official Instagram where he posted a photo of the celebration.

Gutierrez, a 26-year-old Filipina-Italian model, claimed that in 2015 Weinstein sexually assaulted her while meeting over her portfolio, reported The Blast. She filed a police report, and the following day wore a wire and secretly recorded Weinstein’s advances.

Her story was later told in Farrow’s explosive piece for the New Yorker Magazine where multiple women, including Gutierrez, shared harrowing accounts of sexual assault and harassment by the film executive.

“Everyone was just trying to get his attention,” a spy told Page Six of Farrow at the bash.

Farrow has had a stellar year as a reporter and investigative journalist.

Look at all these amazing people I love tolerating my being too lazy to get out of a onesie and calling it a ‘black tie and/or pajamas’ theme.

Variety reported that Farrow described his struggle to get his first Weinstein story reported and published during a Q&A as part of The New Yorker festival.

He finally was able to find an outlet to push forward the controversial piece, a feat he achieved on October 10, 2017.

This birthday boy has a lot to celebrate. Happy Birthday @ronanfarrow. Can’t wait for the next chapter. . . #ronanfarrow #pajamaparty

Farrow made it clear that in his view, he faced efforts to suppress his work on Weinstein from “executives and people with a specific compromised set of interests.” Variety noted that NBC News has since faced harsh criticism for allowing Farrow’s story to walk out the door and over to the New Yorker.

THE GOLDEN BOY! Happy Birthday to Pulitzer Prize winner @RonanFarrow. I had a blast at your “pajamas and tails” bash last night in NYC. A deep low bow to you for shining the global spotlight on the injustice and lifelong harm of sexual abuse. Bravo! #MeToo

“I was kind of rock bottom, career-wise. Tackling the Weinstein story as doggedly as I did — my career fell apart completely,” Farrow said at the event. “My contract was ending. My book publisher dropped me. Another news outlet was racing to scoop me. I was falling behind. I didn’t know if I would ever be able to report this story.”

Farrow famously graduated from Bard College at 15 and earned a Yale Law school degree in 2009.

He has also written books, worked as an advisor to former Secretary of State Hillary Clinton, and worked on-air for MSNBC and NBC News as a journalist.