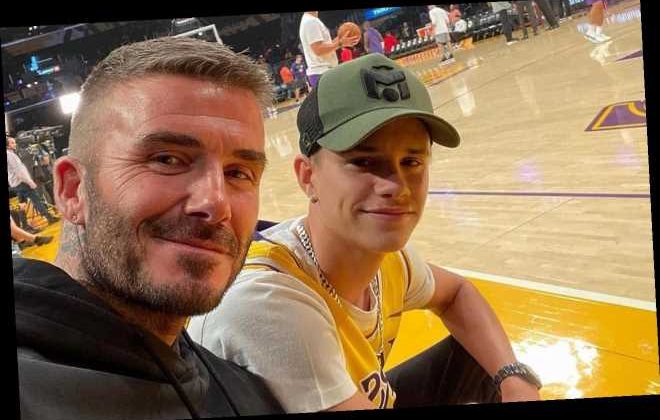 David Beckham’s middle son with Victoria has been training with Inter Miami CF amid Covid-19 pandemic in a bid to become a professional soccer player like his dad.

AceShowbiz –Romeo Beckham has been training with his dad David Beckham‘s soccer team in a bid to turn pro.

The 18-year-old star’s mum Victoria Beckham has revealed her middle son has been practising with Inter Miami – the football team David co-owns – on a daily basis because his ultimate goal is to follow in his former England captain father’s footsteps and become a professional soccer player.

“Romeo has been training with the team over here every day, because ultimately that’s what he wants to do,” she told Vogue magazine.

But Victoria insisted she isn’t in “football wife mode” again just yet, laughing, “The only reason why I’m wearing my Reebok cap is because I haven’t had time to do my hair.”

Romeo and his two brothers, Brooklyn, 21, and Cruz, 15, signed up to London football team Arsenal’s academy in 2014, but all three eventually left.

But David – who also has daughter Harper, nine, with Victoria – said at the time his middle son had “other passions” to pursue, explaining, “Romeo said he didn’t want to play football any more. He’s got other passions and I like that.”

In March 2019, Victoria admitted the couple’s three sons didn’t want to let their father down when they decided they didn’t want to become soccer players.

“I remember Romeo sitting in the bath getting really upset saying, ‘I don’t want to let Daddy down.’ So I told him daddy just wants you to be happy. And now he’s playing tennis. Every day.”