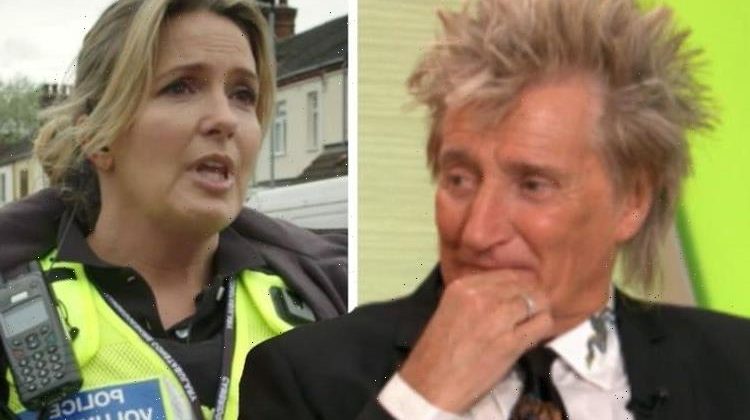 Rod Stewart discusses his marriage to Penny in 2018

Rod Stewart, 76, admitted he lives in constant fear that something might happen to his wife Penny Lancaster, 50, while she’s out patrolling the streets of London. The former Loose Women star completed training in April to become a Special Constable, but the singer revealed he “can’t sleep” at night until he knows she’s safe and has wrapped up her shift.

They were nicking [the dealers] as they tried to escape

In a new interview, the Maggie May artist spoke of his angst, sending a driver to pick her up every night as “her area can be rough”.

Penny was inspired to join the force after taking part in Channel 4’s 2019 series Famous and Fighting Crime.

“Oh man, she’s saved lives, talking people out of jumping off the bridges,” Rod nodded, proud of her accomplishments.

“Just the other day, she stopped a guy in a Lamborghini with blacked-out windows, Saudi Arabian plates and the wrong licence.

“She had the car towed away.”

Being a police officer comes with a major risk, and Rod is forever worrying about the unknown.

He also told The Sun about how Penny was involved in a drugs bust at Liverpool Street Station on Friday night, which compelled him to rush down to the scene to make sure she was safe.

“Her team and their dogs were waiting at the bottom of the escalators,” he told the publication.

“They were nicking [the dealers] as they tried to escape.”

Fully aware of the dangerous situations Penny has to deal with, Rod decided to go and have a look for himself.

“I took my Rolls-Royce through the area the other night, Phantom, as big as they come, white on white,” he chuckled.

“The people were good as gold though. They looked at the car and saw me in the back.

And while he admitted he’ll be on edge until she’s safely at home again, Rod couldn’t be prouder of his other-half.

“I think it’s as cliched as giving something back to society,” he explained.

“She told me she just loves London and she wants to look after it, which is a lovely thing to do.”

In order to obtain a volunteer position within the Met, participants reportedly have to put in 200 hours a year.

They are then given the same powers as a regular police officer.