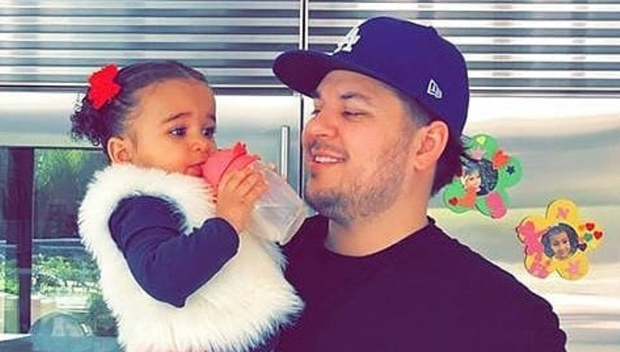 What a cutie! Rob Kardashian is showing off a new pic of two-year-old daughter Dream and she has turned into quite the little lady. Check out her latest photo.

Where has the time gone? It seems like just yesterday that Rob Kardashian and Blac Chyna were engaged and welcomed daughter Dream into the world. That was in Nov. of 2016 and now she’s looking so grown up in a new photo that her 31-year-old dad shared on Twitter. She’s got a great big smile on her face as the little one looks away from the camera while wearing a festive red knit cap. Her dark curls of hair can be seen poking out and she’s wearing a cute pink top with what appears to be a butterfly on it.

Dream is the perfect combo of her parents looks-wise and seems to be the happiest kid ever. Rob loves sharing photos of her on his Instagram account and she always has a huge smile on her face. No matter how bitter Rob and Chyna’s split was, it looks like they’ve been able to co-parent a really joyful child. The sock designer proudly wrote “my babbbbyyyy” underneath her adorable photo.

Rob’s big sis Khloe, 34, gushed over what a great dad he’s become just before Father’s Day in June, saying he’s become so much like his late namesake pop Robert Kardashian Sr. who died from cancer in 2003 “My brother Rob is like my father in so many ways—his sense of humor, silly nature, the way he loves and respects family,” Khloe wrote in a post on her app. “But, seeing him as a father has been beautiful!”

“My dad would do anything for his kids and my brother is the same way for Dream,” Koko continued. “I’m so proud of him! All he wants to do is make his daughter happy and give her unconditional love.”