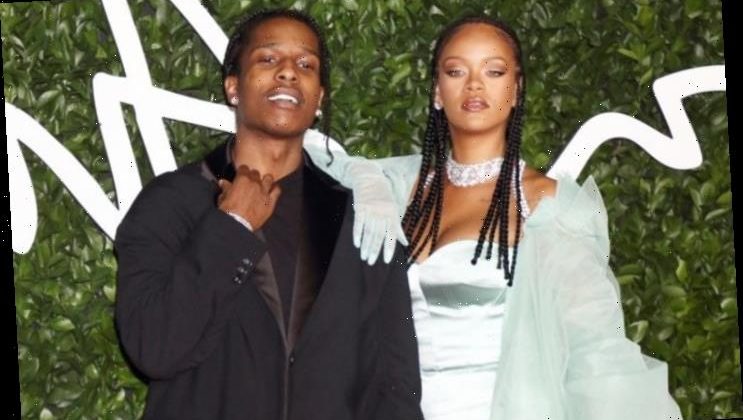 The on-and-off pair, who were recently rumored back together, trade banter in a joint interview for GQ as the Barbadian songstress trolls the rapper about his first red carpet look.

AceShowbiz -For years, Rihanna and A$AP Rocky‘s appearance together has always sparked dating rumors, but that apparently doesn’t put them off from working with each other. The Barbadian songstress and the rapper, who recently collaborated on a promotional photo shoot for her new skincare line, have once again teamed up for a GQ video.

In the joint interview posted on Wednesday, August 26, the rumored reunited exes got flirty as they traded banter throughout a video call. For example, when the A$AP Mob member was asked what his skin type is, he replied that his skin type is “handsome.” Rih then rolled her eyes to his answer.

Elsewhere during the interview, the “Diamonds” singer joked about the first thing the New York City native purchased for under 20 dollar. “Condoms?” she interjected before he could answer. He denied it though, claiming that he bought an $11 T-shirt instead.

Rih also trolled Rocky, whose real name is Rakim Athelaston Nakache Mayers, about his first-ever red carpet look. “Oh my god,” she said as she took a look at his black-on-black outfit featuring an Hermes belt. “You don’t have to point out Hermes and Raf, this is you!? Stop trying to make it sound dope! This is you? You could have used some Fenty Skin back then.”

While the two could not look cuter in the video, people were not impressed that Rih keeps hanging out with Rocky, whom they accused of being a “colorist.” One person blasted the “Umbrella” hitmaker, “rihanna lowkey problematic idc why she chillin wit that self hating colourist?”

“Rihanna dates colorist men smh,” another remarked. A third Instagram user echoed the sentiment, “Why she so obsessed with this colorist???” A fourth one added, “i love rihanna but why is she friends with an alm supporter.”

“I think she going to end up having a baby with him,” another speculated, while someone else weighed in on their relationship, “It bothers me that she’s so cool with him, but I know that’s her business.” Another person slammed Rocky as writing, “Ugh. Don’t wanna see anything about this colorist. That’s why his stroke game WEAK ASF! We all seent the video.”