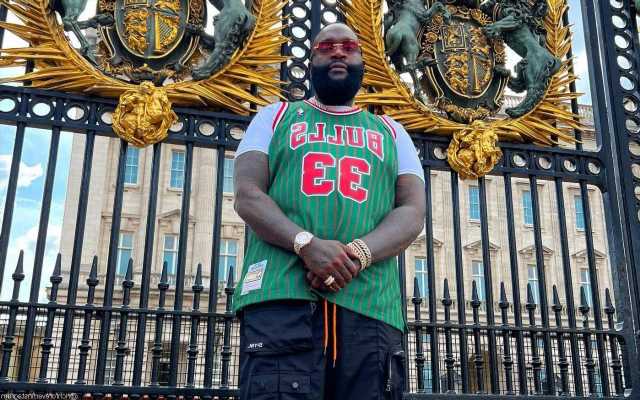 After sharing a video of himself arriving outside of the royal residence, the rapper/record executive reveals that he was not allowed to go through the gates by a member of the Queen’s Guard.

AceShowbiz –Rick Ross expressed his disappointment after being denied entry into London’s Buckingham Palace. Claiming that he was not allowed to enter the royal residence, the “Aston Martin Music” rapper revealed that he was directed to somewhere else instead.

“Alright so y’all saw me go to Buckingham Palace,” the 46-year-old said on Instagram Story after posting a video of him outside the gates of the palace. “I pulled the homie to the side and told him you know, who I was, the Biggest Bawse. And for one of the first times in a long time that didn’t get me in. It didn’t get me through the gates.”

“I didn’t get to sit at the table,” the emcee, born William Leonard Roberts II, went on explaining. “But what he did do was refer me to a spot and they said they’d be waiting on me and I can pick the lobster I wanted to eat so I forgave him.”

Prior to his trip, Rick made an appearance on the “Beyond the Chair” podcast. During the interview, he explained why he never sued anyone he has worked with. “You gotta realize when you a young artist I’m sure after you become successful whatever you look back on you will consider it a bad contract,” he said.

“Have I ever been taken advantage of? No. Have I ever been robbed? No. Have I ever had to sue someone I was in business with musically? No,” the record executive added. “It was just the way I moved I guess. Whoever I was in the contract with we always had an open phone conversation, so if there was anything that was a problem I presented it and just explain it to me. If it’s respectable I’m gonna respect it because I always felt like any contract I signed whatever couple years it was I could work myself out of this.”