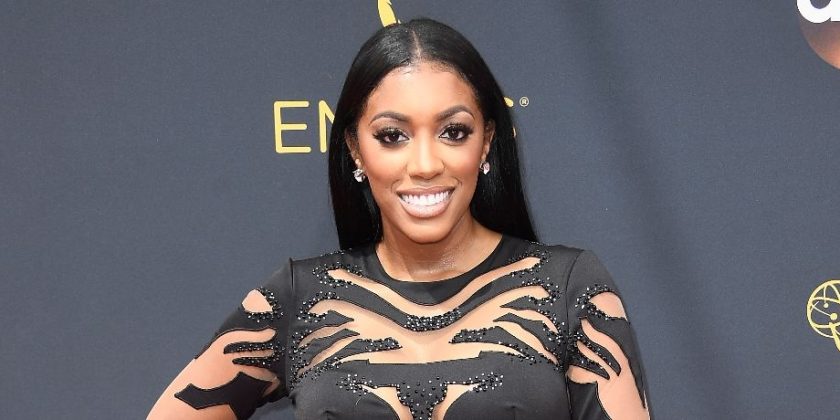 Real Housewives of Atlanta star Porsha Williams is showing off her bare baby in a bikini in a new vacation photo posted to Instagram on December 28. The pregnant reality star proudly revealed her growing middle to the world as she posed in a two-piece on the social media site, jokingly referring to herself as “Thickums.”

The latest snap posted by the mom to be showed her smiling from ear to ear for the camera as she posed in a patterned red and blue bikini.

Williams’ swimwear featured a larger patterned top with tiny matching bottoms. She also stayed in her blue and red theme with a coordinating coverup wrapped around her shoulders that could be seen flowing in the wind.

The star accessorized her bikini look with a gold necklace around her neck, gold hoop earrings in both ears, and a pair of sunglasses atop her head.

Telling her almost 4 million followers that she was enjoying a babymoon with her fiance Dennis McKinley before their baby arrives in the New Year, pregnant Porsha captioned the stunning photo with a flower and a palm tree emoji as she soaked up the sun.

She then added the hashtags #Thickums, #MckinleyBabyMoon, #Booming and #PjMomma. Porsha also tagged her location as being the very tropical Baha Mar in the Bahamas.

But the latest look at her bare baby bump isn’t the first time the RHOA star has given her millions of followers a glimpse at her growing middle.

Per Bravo, Williams was also showing off her bump in a pink bikini on Christmas Eve as she cradled her middle while posing by the pool.

Rocking a hot pink two-piece, she posed for the camera with one hand on her tummy. Porsha wrote in the caption, “PJ wanted some sun… #MckinleyBabyMoon.”

????I can’t thank this amazing team enough for a wonderful babymoon shoot! Photographer @stanlophotography Made me feel so comfortable & knew all my angles lol !! The Videographer @ndofilms Truly captured the real time experience so well! My Glam was my none other than Hair: @hairbyestylez Makeup: @sarshalepeche Both gorgeous women themselves, they totally enhanced my natural beauty and gave a wonderful polished look! Also thank you and much respect to Dress Designers @theodoreelyett & @laviebyck for hand making two Custom absolutely gorgeous gowns in one day or so! I cannot wait to see all the shots lots of love Porsha! ❤️? #PjMomma #MckinleyBabyMoon

Earlier this month, Williams opened up about how she told Dennis that she was expecting their first child together.

Per People, she revealed all as the cameras rolled for Real Housewives of Atlanta on her man’s 37th birthday back in July.

Porsha sweetly gifted David a baby onesie and a pair of tiny shoes for his birthday, telling him, “Aren’t these cute?” before breaking the big news as she revealed, “I’m pregnant!”

She then went on to call being pregnant a “miracle” while gushing over David on the show.

“I have never had someone want to be there for me. So that’s why this pregnancy is like a miracle to me,” Porsha shared with Real Housewives fans. “Because I am starting to see all these things that I have prayed for and wanted for so many years actually happen.”

The couple got engaged in October.