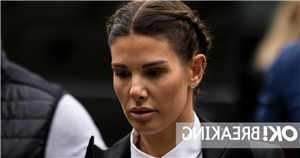 Rebekah Vardy has spoken out for the first time since losing her libel claim against Coleen Rooney on Friday 29 July, saying that she is "extremely sad and disappointed".

The 40 year old launched legal action after Coleen, 36, who claimed her fellow WAG's Instagram account was linked to stories about her leaking to the press.

The seven day-long trial took place back in May and after a wait of over eight weeks, Mrs Justice Karen Steyn delivered her verdict – announcing that Rebekah lost.

Now, Rebekah has released a statement, sharing her devastation following the loss as she said: "I am extremely sad and disappointed at the decision that the judge has reached.

“It is not the result that I had expected, nor believe was just. I brought this action to vindicate my reputation and am devastated by the judge’s finding.

She continued: "The judge accepted that publication of Coleen’s post was not in the ‘public interest’ and she also rejected her claim that I was the ‘Secret Wag’.

“But as for the rest of her judgement, she got it wrong and this is something I cannot accept.”

The star also pleaded with vile trolls who have subjected her to abuse in the years since Coleen's initial post.

She said: “As I explained in my evidence I, my family and even my unborn baby, were subjected to disgusting messages and vile abuse following Coleen’s Post and these have continued even during the course of the trial.

“Please can the people who have been abusing me and my family now stop. The case is over. I want to thank everyone who has supported me.”

In Judge Steyn's ruling, she said it was “likely” that Rebekah's agent at the time, Caroline Watt, “undertook the direct act” of passing the information to The Sun, condemned "vile" trolls who sent abuse after Coleen's initial post and labelled Rebekah's evidence "manifestly inconsistent" with other evidence heard by the court.

Coleen has already spoken out on how "pleased" she is that the ruling went in her favour.

However, she “never believed” the case should have gone to court “at such expense in times of hardship for so many people when the money could have been far better spent helping others".

In her statement, she shared: "Both before and after my social media posts in October 2019, I made every effort to avoid the need for such a drawn out and public court case. All my attempts to do so were knocked back by Mrs (Rebekah) Vardy.

“This left me with no alternative but to go through with the case to defend myself and to end the repeated leaking of my private information to The Sun.

“These leaks from my private Instagram account began in 2017. They continued for almost two years, intruding on my privacy and that of my family. Although I bear Mrs Vardy no ill-will, today’s judgment makes clear that I was right in what I said in my posts of October 2019."

Coleen reportedly spent five months trying to work out who the culprit was, and had eventually narrowed it down to Rebekah's account.

She wrote: "For a few years now someone who I trusted to follow me on my personal Instagram account has been consistently informing The S*n newspaper of my private posts and stories.

"There has been so much information given to them about me, my friends and my family – all without my permission or knowledge. After a long time of trying to figure out who it could be, for various reasons, I had a suspicion."

She then outlined how she'd blocked everyone from viewing her Instagram stories on her private account, except for one account. Coleen continued by posting a series of "false stories" to see "if they made their way into the newspaper" and they did.

She finished the explosive tweet by writing: "I have saved and screenshotted all the original stories which clearly show just one person has viewed them. It's…… Rebekah Vardy's account."

Within hours, Rebekah – who was heavily pregnant at the time – vehemently denied the claim and revealed she had spoken to Coleen privately about the matter.

In June 2020, Rebekah launched libel proceedings against Coleen, with her lawyers claiming she “suffered extreme distress, hurt, anxiety and embarrassment as a result of the publication of the post and the events which followed”.