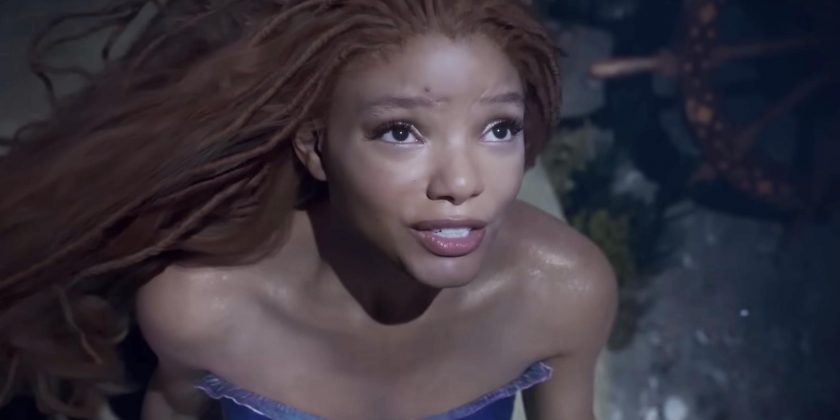 Look at this racism… Isn’t it neat?

It boggles the mind the lengths a bunch of racist a-holes are going to after getting butthurt by the casting of the new Little Mermaid live action remake. Disney cast singer Halle Bailey as the iconic Ariel. Seems like a great choice as she’s the right age, got a fantastic voice… But of course because she’s Black, certain folks lost their damn minds — and started spamming the thumbs down button on the first teaser.

Disney has now turned off the Dislike button, but before they did sources reported the number getting up to as high as 1.5 MILLION!

Because for these tiny-brained weirdos a Black woman can’t just exist, if they have to see her in a movie it means it’s immediately “woke” propaganda. (Or maybe they just hate Black people?? Maybe?)

But thanks to the wonders (??) of modern technology, racists no longer have to learn tolerance and acceptance — they figured out how to literally erase Black faces from their f**king TV screens!

Just days after the reveal of the first footage at D23, someone used AI tech to “fix” the scene by replacing Halle with a CGI white woman. Get a glimpse of their version (below):

Hilariously, these racist jerks are too spineless to even own up to their racism — even as they’re actively REPLACING A BLACK WOMAN WITH A WHITE CARTOON. One of the first to promote the CG replacement was bragging on Twitter that his friend had “fixed The Little Mermaid” and “turned the woke actor into a ginger white girl” — and even promised he could “fix the whole movie when it comes out.” He declared:

But when tons of folks rightfully commented that this was racist trash, he went immediately into defensive mode:

“Note for Twitter: This is for purely educational purposes, please do not misinterpret this in a racist way.”

“I am just amazed by high-IQ friend who works with Artificial Intelligence and the stuff he can make, and wanted to show people his field of study.”

Riiiight. It’s all just an intellectual exercise to replace a “woke actor” with a white CG woman, so that it’s “over for wokecels.” Just science, right? Sigh…

Not only are these people ignorant and hateful, we’re just going to say it — they’re complete cowards, too. Maybe if they realized that other races were also just people trying to exist in the world with them, they’d have to face that they were the ones with a problem… Sadly now it seems like they’ll have to face that fact less and less as they can apparently delete Black folks from their movies, too. Seriously, people, grow the f**k up.