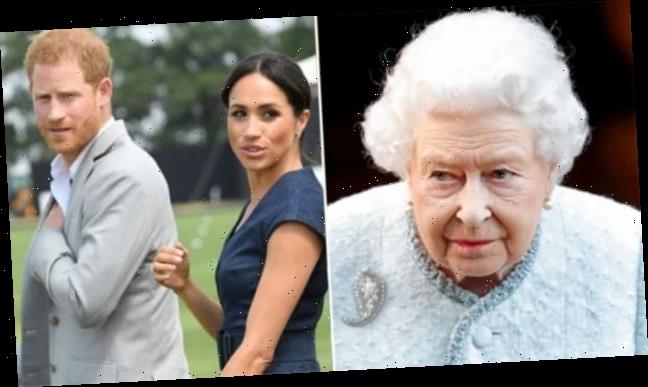 And, in essence, the ancient monarch has said the following in the wake of this couple wanting to distance itself from the Royal Family:

Don’t let the door hit you on the way out!

We may be paraphrasing a little bit here, but the Queen’s statement on Monday followed a two-hour meeting with Harry, William and other high-ups at Kensington Palace.

It essentially gave Harry and his wife permission to step back from their Royal roles, but not without a few hints of bitterness and resentment.

“Today my family had very constructive discussions on the future of my grandson and his family,” Her Majesty said in a message released Monday, adding:

“My family and I are entirely supportive of Harry and Meghan’s desire to create a new life as a young family.

“Although we would have preferred them to remain full-time working Members of the Royal Family, we respect and understand their wish to live a more independent life as a family while remaining a valued part of my family.”

Really, what else could the Queen have said in this position?

Back on January 8, shortly after Markle and Harry made their intentions to peace out of London clear, the Queen left no doubt that she was pissed over the decision.

“Discussions with the Duke and Duchess of Sussex are at an early stage,” read this previous statement by palace officials.

“We understand their desire to take a different approach, but these are complicated issues that will take time to work through.”

We’re sure there still are plenty of complicated issues to work through — but it’s been less than a week and Meghan and Harry appear to have gotten their wish, with very little resistance.

The Queen added today that “Harry and Meghan have made clear that they do not want to be reliant on public funds in their new lives.

“It has therefore been agreed that there will be a period of transition in which the Sussexes will spend time in Canada and the UK,” she continued.

“These are complex matters for my family to resolve, and there is some more work to be done, but I have asked for final decisions to be reached in the coming days.”

The Queen’s announcement here came shortly after reports spread she had hosted a meeting with the Royal Households to figure out next steps.

Markle was not present for this meeting because she’s in Canada with her son, but it is believed she called in from afar.

It has also been rumored that she and Harry have already spoken to Disney about some sort of work for the ex-actress in the days, weeks and/or months ahead.

This, while fans of the show Suits are clamoring for a spinoff.

“After many months of reflection and internal discussions, we have chosen to make a transition this year in starting to carve out a progressive new role within this institution,” the couple announced at the time.

“We intend to step back as ‘senior’ members of the Royal Family and work to become financially independent, while continuing to fully support Her Majesty The Queen. It is with your encouragement, particularly over the last few years, that we feel prepared to make this adjustment.

“We now plan to balance our time between the United Kingdom and North America, continuing to honor our duty to The Queen, the Commonwealth, and our patronages.”

Neither Meghan nor Harry has said anything since.

But this is how they concluded:

We look forward to sharing the full details of this exciting next step in due course, as we continue to collaborate with Her Majesty The Queen, The Prince of Wales, The Duke of Cambridge and all relevant parties.

Until then, please accept our deepest thanks for your continued support.