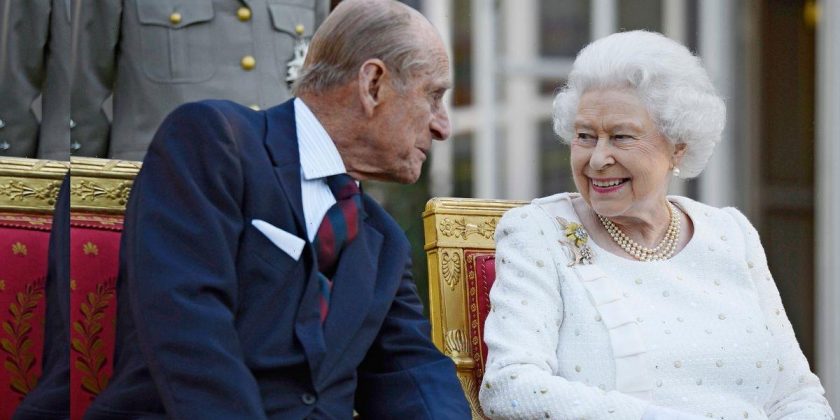 A shared sense of fun, thoughtful gestures and a down to earth quality were the hallmarks of the Prince Philip and Queen Elizabeth's enduring union.

When once asked to explain the secret of his grandparents’ long marriage, the Duke of Cambridge replied, “My grandfather makes my grandmother laugh.

Indeed, the royal couple’s shared sense of humour has been well documented.

Both lovers of pranks and practical jokes, during their tour of Canada in 1951, the Duke of Edinburgh chased Her Majesty down a train corridor wearing a set of giant false teeth.

And when the Queen sat down to film her first televised Christmas speech in 1957, it is reported that Philip, who has died aged 99, sent a note to the director, saying, “Tell her to remember the wailing and gnashing of teeth!” – a sarcastic reference to the torment of hell in the New Testament – as a way to calm her jitters.

On another occasion, the Duke left a can of nuts on the Queen’s desk during a tour. When she opened it, she let out a squeal as a joke snake popped out!

The couple were never shy of joking at each other’s expense.

Philip cracked up when a servant flipped up a serving table and a piece of gateau landed on the Queen. One year at Royal Ascot, Philip’s chair broke and he fell to the floor, leaving his wife in fits of giggles.

He got his own back during Christmas 2004, when the Queen went sprawling after a servant took her chair away, thinking she was leaving the table. There was a shocked silence – before Philip led the family in guffaws of laughter!

It is believed that Philip saw his ability to keep the Queen in good spirits as one of his most important roles as her consort. This was shown clearly in a candid picture of the couple bursting into fits of laughter while inspecting the Queen’s Company of the Grenadier Guards at Windsor Castle in April 2003. While the exact cause of their giggles is not known, it was believed to be over the presence of a bee.

As well as humour, the Queen and Prince Philip’s marriage had its fair share of romance.

Proving just how smitten she was when they first started courting, Elizabeth would play People Will Say We’re In Love from the musical Oklahoma! over and over again while Philip was serving in the Royal Navy. It remained the couple’s favourite song.

The Queen expressed her happiness at her married life in letters written to her mother soon after her 1947 wedding to Philip.

She wrote, “Philip is an angel – he is so kind and thoughtful, and living with him and having him around all the time is just perfect.”

He wrote to his new mother-in-law, “Lilibet is the only thing in this world which is absolutely real to me.” He continued, “My ambition is to weld the two of us into a new combined existence that will not only be able to withstand the shocks directed at us, but will also have a positive existence for the good.”

Despite the Queen being a very private person, Philip had no qualms about declaring his love for her and revealing some of the more intimate details of their relationship.

The Duke told friends during a private dinner party in the south of France shortly after their wedding that he and his wife enjoyed a very “passionate” marriage.

When Philip’s cousin Patricia Mountbatten remarked on the Queen’s flawless complexion, the Duke replied, “Yes, and she’s like that all over.”

By his own admission, Philip could be a difficult man to live with. During a gala lunch to mark the couple’s 50th wedding anniversary in 1997, he told fellow guests, “The Queen has the quality of tolerance in abundance!”

Her Majesty has been heard to say, “Oh Philip, do shut up,” and, “You don’t know what you’re talking about.”

As part of his speech to celebrate the special anniversary, Philip said, “I think the main lesson we have learnt is that tolerance is the one essential ingredient of any happy marriage. It may not be quite so important when things are going well, but it is absolutely vital when the going gets difficult.”

Although Prince Philip was required to walk several steps behind his wife during public engagements, behind the palace gates he was known to wear the trousers.

In 1994, he made this known to all and sundry as the Queen kept chatting to a local dignitary in Belize, while Philip waited to board the Royal Yacht Britannia. He lost his patience and snapped, “Get a move on!” at her.

However, their enduring marriage was never short of affection. Philip was playing squash at Buckingham Palace when their first child, Prince Charles, was born. Informed of the joyful news, he bounded up the stairs with a bunch of carnations and a bottle of champagne!

In 1993, the Queen was due to give a speech but couldn’t find her reading glasses. Philip got up and announced, “I’m afraid the Queen forgot her glasses so I have to read the speech,” and proceeded to do just that!

Sweetly, the Queen always carried in her handbag a silver make-up case that Philip had made for her many years ago, and a picture of the Duke in his naval uniform took pride of place on her writing table.

“He had a very wholesome effect on her,” said one diplomat. “She had a protective shell around her and he brought her out of it. He helped to make her what she’s become.”

And it was Philip who broke the news to her of her father’s death. They were staying in Kenya en route to visit Australia and New Zealand. After receiving a phone call informing him of the death of his father-in-law, Philip took Elizabeth out into the garden to tell her the
sad news.

The Queen once shared to a friend that in another world, she would have liked to retire to Lancashire with Philip and live in a beautiful valley in the Forest of Bowland.

The Queen’s former private secretary, Lord Charteris, summed up their relationship perfectly, saying, “Prince Philip is the only man in the world who treats the Queen simply as another human being. Strange as it may seem, I believe she values that.”

Look out for 'Kate At 40', a collector's edition of OK! magazine packed full of exclusive content about the Duchess Of Cambridge. On sale now for £4.99 at most good newsagents.