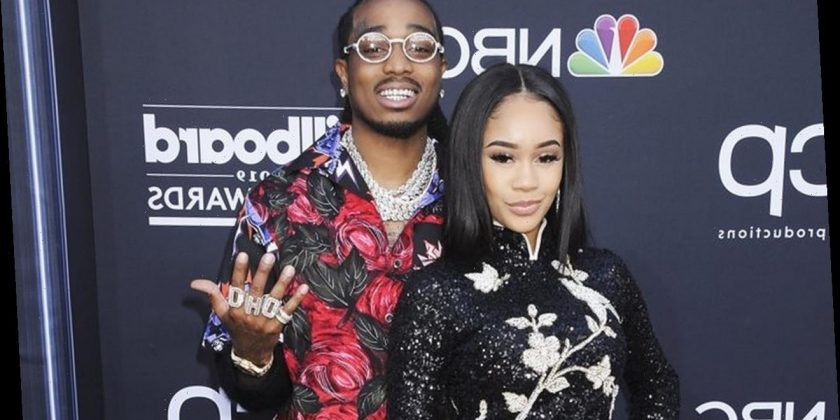 The Migos rapper and the ‘Tap In’ hitmaker have been seen in surveillance video footage having an altercation in an elevator at her apartment building before breakup.

AceShowbiz –Quavo and Saweetie fought in an elevator at a Los Angeles apartment building before splitting up.

In surveillance video footage obtained by TMZ, the Best Friend rapper appears to lash out at the Migos star and they grapple over a Call of Duty case.

Saweetie tumbles to the floor as her then-boyfriend stands over her.

Quavo eventually exits the elevator as his ex gathers herself and gets up.

Representatives for both stars have yet to comment on the events in the video, which reportedly took place last year (20) at an apartment building where Saweetie was renting a pad.

The couple called time on its two-year romance last month (Feb21), with Saweetie implying that Quavo had cheated on her.

“Presents don’t band aid scars and the love isn’t real when the intimacy is given to other women,” she tweeted, prompting the Migos rapper to respond, “I had love for you and disappointed you did all that. You are not the woman I thought you were. I wish you nothing but the best.”

He also wrote, “I know you want to make this into a show so I’ll play my part just this one time. I don’t normally put my business out there, especially my personal life. I feel the need to address this so there are no false narratives.”

Before the breakup, Saweetie revealed the things Quavo did for her that melted her heart, “I’ll be coming out of a Zoom meeting or done doing something and he would have saved me some of his food. Those are the things that really matter: the things that have no price on them.”

She then commented on his pricey car gift, “The Bentley is cool but I’m really into intimacy and how you treat me with my emotional feels.”