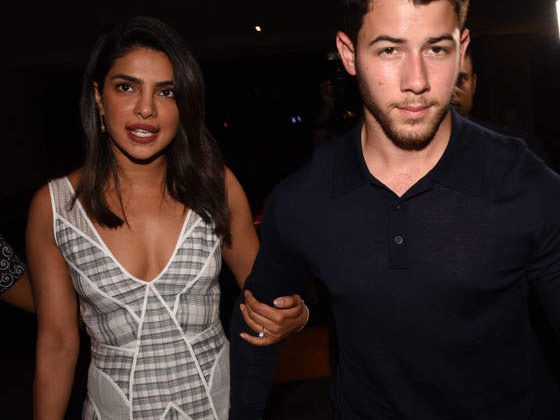 Priyanka Chopra is really milking the hell out of her months-long marriage to Nick Jonas by throwing a million parties and now she’s taking some time off from her multi-city nuptial tour to sit and chat with Ellen DeGeneres about, not only her wedding, but a movie based on Netflix’s documentary Wild Wild Country that she’s putting together.

On today’s episode of The Ellen DeGeneres Show, Ellen teased Priyanka about the amount of celebrations she’s had in regards to her never-ending wedding. Priyanka kept it modest with her response by saying a 200 person wedding is intimate. Whatever Priyanka. If you were going for intimate you and Nick should have gone down to the courthouse with your parents and saved a couple million dollars by having one reception at Denny’s. However Priyanka made it known quickly that if her mother Madhu Chopra had her way, she would have invited everyone she knows, and everyone they know, because that’s how a traditional Indian wedding is done.

“It was just three days!” the new Mrs. Jonas explained, defending herself. “One Indian ceremony and one western Christian ceremony, and one day of pre-rituals — which we have in the Hindu wedding. But it was not, like … usually Indian weddings are a thousand people, at least. We only had 200, which was mostly family because both of us have giant families.”

“When you have 100 people in your family … my dad’s side, my mom’s side, they have brothers, sisters, cousins, kids, it’s like a whole thing,” Chopra added.

And since they were already on the subject of the people who weren’t invited to the wedding, Ellen kindly reminded Priyanka that her invitation must have gotten lost in the mail because she was clearly an afterthought. Ellen’s show was one of the very first places that the Jonas Bros. performed and Ellen was also Nick’s landlord for a time. However, none of this warranted an invite and although Priyanka tried to play it off by being cute with her response the undertone was definitely “Oh honey we weren’t inviting you in the first place.”

“We were so offended that you didn’t even respond to our invite,” Chopra shot back, sarcastically. “It’s so true! I was like, ‘We’re not good enough for Ellen? She wouldn’t come to India? She doesn’t even respond anymore? Nick, you’ve had such a good relationship with her …’ I was very offended for him, honestly. But I’m just the wife. I don’t know anything …”

After pushing her small, little wedding, Priyanka pushed how she’s working with Barry Levinson on a Wild, Wild Country movie, which focuses on Indian guru Bhagwan Rajneesh and his henchwoman Ma Anand Sheela. The Hollywood Reporter says that Priyanka gushed over Levinson, calling him an “iconic American director” before revealing more details about the project.

“We’re developing it as the character of Sheela, who was this guru who originated from India, his right-hand woman. And she was just devious and created a whole cult in America, brought people here,” Chopra told DeGeneres.

Chopra said that she is not only producing the film, but also starring in it. Although, she did not reveal which character she will play. She told DeGeneres that she believes juggling acting and producing responsibilities “would be really cool.”

Learning that she has an upcoming film project to focus on might be an indication that she won’t have time to throw anymore wedding receptions so we should all be thankful for that. Though she may throw one more for the film crew since they haven’t had an opportunity to congratulate her yet.