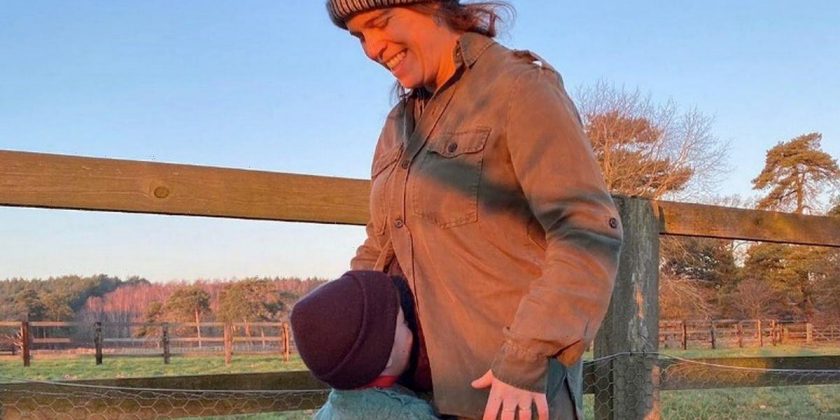 Princess Eugenie has shared a sweet picture of her son August kissing her blossoming baby bump as she announced she's pregnant.

The 32 year old royal, who recently enjoyed a festive night out with her husband, took to her Instagram feed to post the adorable snap, which sees her posing in a shirt that's unbuttoned from the waist down, alongside a pair of jeans and winter boots.

Her son August, one, who she shares with Jack Brooksbank, 36, can be seen wearing a green jumper with purple trousers and a matching beanie as he wraps his arms around her and plants a kiss on her belly.

In the caption, the doting mum told her 1.6million followers that she's due to give birth in a matter of months.

She wrote: "We’re so excited to share that there will be a new addition to our family this summer," before revealing that her husband took the photo.

Fans were quick to comment on the happy news as one person wrote: "Omg congratulations princess Eugenie," with a red heart emoji.

Another shared: "Congratulations Madam to you and your husband," alongside a white heart emoji.

While a third added: "Congratulations so happy for you all! Great to hear some great news coming from the UK !" with three celebration emojis.

Meanwhile, Buckingham Palace said the Royal Family was “delighted” and that August was “very much” looking forward to becoming a big brother.

A Buckingham Palace spokesperson said: “Princess Eugenie and Mr Jack Brooksbank are pleased to announce they are expecting their second child this summer.

“The family are delighted and August is very much looking forward to being a big brother.”

The baby will be born 13th in line to the throne and will be a plain Miss or Master.

He or she will be the first of the Queen’s great-grandchildren to be born since her death, and will arrive in the King’s coronation year.

Eugenie and Jack married in a lavish ceremony in St George's Chapel at Windsor Castle four years ago.

The couple welcomed their first child, August, on 9 February 2021. At the time of his birth he was 11th in line to the throne, and is now 12th in line.

The happy news has brought joy to the Windsors amid difficult times following the publication of the Duke of Sussex’s controversial tell-all memoir.

Eugenie has been said to be "keeping a foot in each camp" in regards to the royal 'feud' involving Prince Harry, 38, following his Netflix documentary, multiple interviews and his memoir Spare.

Eugenie was the first member of the royal family to visit Harry in California following his and Meghan Markle’s move to the US, with the pair pictured attending the Super Bowl together.

However she's also shown support for Prince William and Kate Middleton, having attended Kate’s second Together At Christmas carol concert at Westminster Abbey on the same day the final episodes of Harry and Meghan's docuseries dropped.

Royal expert Katie Nicholl, author of The New Royals, exclusively told OK! that Eugenie and her mother Sarah Ferguson, 63, don’t appear to have picked a definitive side.

She said: "Eugenie along with her mother has been able to have a foot in each camp and I think unlike the palace staff who had to put their stake in one team or another, Eugenie has managed to tow that line.

“I suspect it’s something of a comfort to both Harry and William that if they’re not speaking directly, they might at least learn something about the other’s lives, not by tuning into Netflix, but from their cousin."