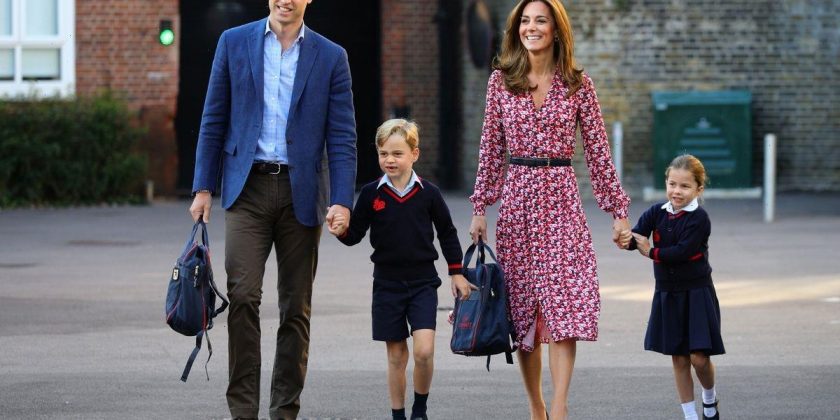 Prince George celebrated turning eight on 22 July, and the adorable tot was seen in a new photo.

Prince William and Kate Middleton shared an adorable photo of the youngster, and the third in line to the throne could be seen in a navy polo shirt with orange stripes and a pair of navy shorts as he was all smiles in the countryside, and appeared to be sat on the bonnet of a Land Rover Defender.

Despite already having an impressive moniker of His Royal Highness Prince George of Cambridge, he is known as something different at school.

While at school, the eight year old goes by the name of George Cambridge.

Little George attends Thomas' School in Battersea, and his name is what it is because it stems from his parents, the Duke and Duchess of Cambridge.

Princess Charlotte also holds the same name – Charlotte Cambridge – and Louis will likely be Louis Cambridge when he attends school.

While in school, George's father Prince William took the surname Wales due to his father's title of Prince of Wales.

As well as George Cambridge, it is believed that Kate and William call their tot 'PG,' which stands for Prince George.

Kate and William were even believed to have added 'Tips' after PG, making it PG Tips after the tea brand.

However, the name has since reportedly been shortened to just 'Tips.'

Releasing the adorable photo of the tot to celebrate his birthday, a short statement was released too, which read: "The Duke and Duchess of Cambridge are very pleased to share a new photograph of Prince George ahead of his eighth birthday tomorrow.

"The photograph was taken earlier this month in Norfolk by The Duchess."

Who are the godparents to the royal children? From Prince George to Archie Harrison

Mum-of-three Kate has found a true hobby in photography as she often shares private candid snaps of her children for special moments and occasions in royal life.

Last year to celebrate his seventh birthday, the Duchess posted a beautiful picture of her son on a countryside walk as he donned a camouflage T-shirt.

Royal fans love the opportunity to get an insight into the Cambridges’ lives without the official pomp and circumstance.

George joined his mum and dad at Wembley Stadium for the Euro 2020 matches and he looked every inch the future King as he wore a smart navy suit to match his dad for the sporting occasion.

Seated in between the Duke and Duchess in the royal box, they were surrounded by the likes of Tom Cruise and David Beckham for the final of England vs Italy.