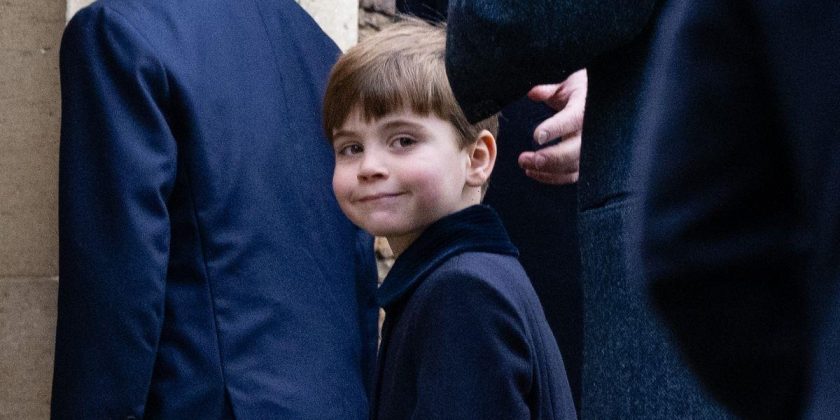 Prince Louis became the star of the show at this year’s Royal Family Christmas walkabout, as the adorable youngster caused “chaos” when he became distracted by the thousands of well-wishers that had come out to celebrate the festive season.

Attending the annual walkabout outside Sandringham for the very first time on Christmas Day, royal fans couldn’t get enough of little Louis, four, as he greeted crowds at his mum Princess Kate’s side.

Yet during the event, it appeared Louis had become distracted by the thousands of visitors that had lined the roads near to the St Mary Magdalene Church, where the Christmas Day service was due to be held.

Accepting gift after gift from members of the public, the dedicated tot soon began to lag behind without realising his mum had continued to walk on ahead.

Suddenly noticing the distance between them, the youngster immediately broke into a sprint as he tore after Kate in order to catch up – something one fan even dubbed a moment of “pure chaos.”

Dressed in a navy coat and matching shorts and socks for the occasion, the young royal’s actions delighted fans watching at home.

“Prince Louis continues to be the gift that keeps on giving,” penned one amused fan.

Another also agreed, as they wrote: “Prince Louis is so full of energy – I’d love to hear his conversations.”

The moment of levity was a stark contrast to the more somber tone of King Charles’ debut Christmas speech as the reigning monarch which followed just a few hours later.

During his historic speech, which was broadcast to the nation at 3pm, he said Christmas was a "particularly poignant time" for people who have lost family members as he reflected on the death of his late mother, The Queen earlier this year.

Addressing the nation from the Chapel of St George at Windsor Castle, just a stone's throw away from where his mother was buried at the King George VI Memorial Chapel, Charles poignantly and succinctly reflected on the loss.

"I am standing here in this exquisite Chapel of St George at Windsor Castle, so close to where my beloved mother, the late Queen, is laid to rest with my dear father," Charles said.

"I am reminded of the deeply touching letters, cards and messages which so many of you have sent my wife and myself and I cannot thank you enough for the love and sympathy you have shown our whole family.

"Christmas is a particularly poignant time for all of us who have lost loved ones.

"We feel their absence at every familiar turn of the season and remember them in each cherished tradition."