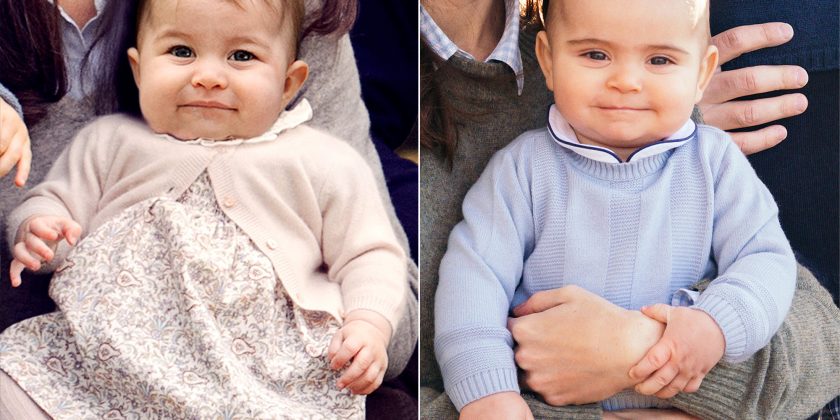 Princess Charlotte has been known to be Queen Elizabeth’s mini-me, but now the little royal has her own lookalike!

Prince William and Kate Middleton released their official Christmas card on Friday, for the first time as a family of five thanks to 8-month-old Prince Louis‘ holiday portrait debut.

Little Louis may be wearing 5-year-old brother Prince George‘s hand-me-down cotton bloomer shorts and shoes in the photo, but he looks exactly like Charlotte when she was around the same age. As seen in the family’s 2015 Christmas card, Charlotte and Louis share their mother’s brown eyes and hair. The princess is even giving the camera the same smirk as Louis in this year’s card!

The two siblings’ birthdays are just over a week apart – with 3-year-old Charlotte celebrating hers on May 2 while Louis was born on April 23 – so it makes sense that both Christmas portraits were likely taken when they were around the same age.

Although George had lighter hair as a baby, he too shared the family trait of chubby cheeks and a cheeky grin, which were on display as he joined his parents on a royal tour in April 2014 when he was 9 months old.

The bond between Louis and Charlotte was apparent from early on, when proud parents Prince William and Princess Kate shared new photos of the siblings to mark the birth of the royal baby and to celebrate his big sister’s third birthday in May.

The adorable photo of the duo was taken on May 2 (Charlotte’s birthday). Already a protective big sister, Charlotte cradles Louis in her lap and places a sweet kiss on her sleeping baby brother’s head.

Charlotte’s love for her younger brother was on display again in portraits from Louis’ christening. In a group shot with all the royal family members, including uncle Prince Harry and aunt Meghan Markle, Charlotte sits next to her mom. While everyone else looks at the camera and smiles, the proud big sister is focused only on Louis as she lovingly gazes at her baby brother and adorably holds his hand.