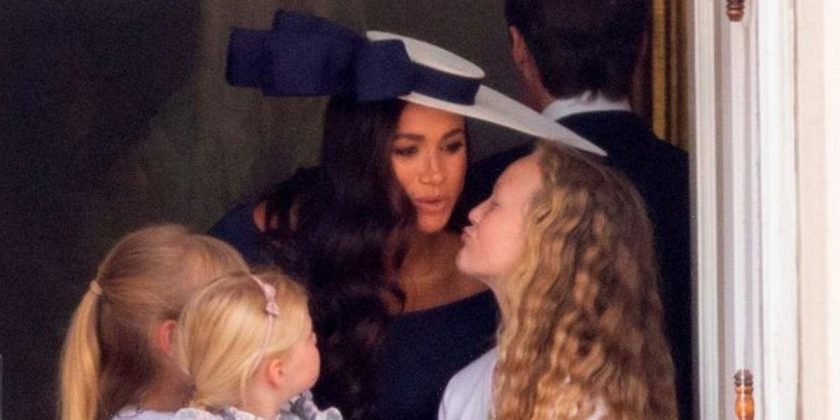 Prince Harry and Meghan Markle reportedly enjoyed a lovely lunch with the Queen following Trooping The Colour on Thursday.

The pair kept a low profile as Her Majesty's Jubilee weekend kicked off with the Duchess of Sussex, 40, seen entertaining some of the youngest members of the Royal family before she and Harry enjoyed a chat with the Duke of Kent.

And while they watched the Trooping the Colour parade from the Horse Guards Parade, they later enjoyed celebrations with the rest of the family during lunch, MailOnline has claimed.

The pair, who now live Stateside, are set to make their first joint royal engagement in two years at Friday's Service of Thanksgiving at St Paul's Cathedral.

Meghan and Harry are believed to have travelled to the UK with their own children, Archie and Lilibet, but it is thought they won't be joining them at any public engagements.

Meanwhile, a body language expert spoke of Meghan and Harry's sighting the day before, saying they were both "in their element" and looking happy and relaxed.

"Meghan was looking playful and in her element with a group of young royals who also seemed to adore her, shushing them with her eyes wide and rounded but also smiling, and she shushed to suggest she wasn't being totally serious," Judi James told The Mirror.

She added: "Her loving gaze at Harry created some solid continuity with the more public PDAs the couple are famous for and the fun they were having looked a world away from some of the more tense-looking poses from the top-level royals out on the balcony as they "watched the fly-past."

The pair are set to continue their Jubilee commitments on Friday at the service of Thanksgiving at St Paul's Cathedral – however, the Queen will not attend.

It was revealed she experienced "some discomfort" during Thursday's festivities and will now be taking it easier.

A spokesperson for the palace said: "The Queen greatly enjoyed today's Birthday Parade and Flypast but did experience some discomfort. Taking into account the journey and activity required to participate…at St Paul's Cathedral, Her Majesty with great reluctance, has concluded that she will not attend."

While she pulled out of Friday's festivities, the spokesperson went on to say that Her Majesty was "looking forward" to the Beacon lighting, which took place on Thursday evening.

In the special dual ceremony with her grandson Prince William, 39, who was 22 miles away at the palace to play his part in the dual ceremony and lighting another beacon in London, the Queen touched the Commonwealth of Nations Globe to trigger the lighting of the principal beacon outside her London home.

For all the latest royal stories, sign up for OK! 's daily newsletter here.