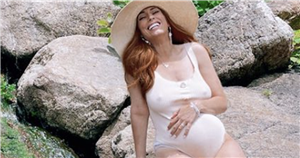 Stacey Solomon is glowing in a new photograph of herself cradling her blossoming baby bump on her relaxing weekend away.

The 31 year old has been spending time in Cornwall with her fiancé Joe Swash and their two year old son Rex whilst her other sons, Zachary, 13, and Leighton, nine, spent the weekend with their dads.

Amongst the gorgeous pictures and videos of her youngest son playing in the sand and exploring the greenery the coastal town has to offer, was the beautiful shot of Stacey resting on a rock by a waterfall.

Loose Women panellist Stacey wore a beautiful cream swimsuit, which she matched with a large sun hat in the same colour, as beamed at the camera.

Resting a hand at the top of her baby bump as she placed the other on one of the large rocks, Stacey wrote: "Took baby girl up to see the waterfall".

Whilst filming Rex playing in the waterfall, Stacey explained to fans: "There's a little waterfall that comes from a stream above the top of the rocks and the water comes down to this little puddle bit perfect for Rex.

"He loves it because the sea is too rough for him to properly paddle in."

The former X Factor finalist also shared a stunning shot of herself and Rex playing on the beach, tip toeing into the sea.

She emotionally wrote: "Playing with you is my favourite thing to do."

Emotions were running hight in the Solomon-Swash household last week as Stacey revealed she was expecting her first baby girl after welcoming three boys.

After sharing the happy gender reveal news with fans on Friday, Stacey confessed she is nervous about being a mum to a girl.

Speaking in an Instagram story, which shows Stacey sat in a car, she revealed she was overwhelmed with emotion.

The soon-to-be mum-of-four said: "We are all packed and on the way and I'm just sitting here reading your messages.

"I can't even cope. So many of you have sent such lovely messages saying 'she's…' just 'she's'. Oh my God she! Just saying she," Stacey added giggling.

She added: "But oh my gosh we are so excited and so over the moon and your loveliness is EVERYTHING. Thank uuuuuu".