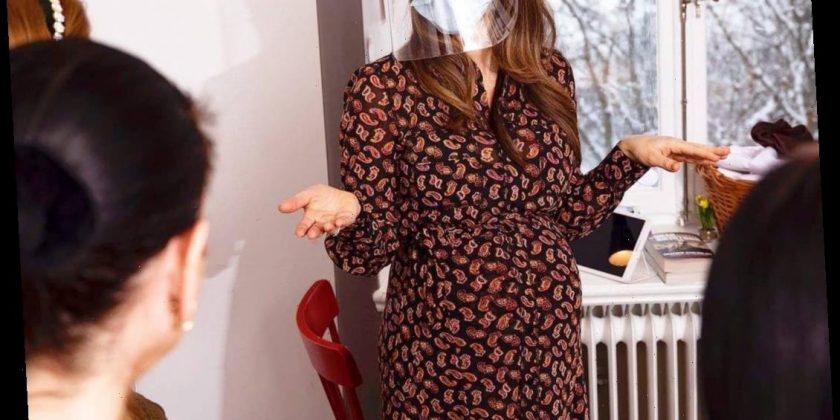 Sweden's Princess Sofia is keeping up with her busy royal schedule ahead of welcoming her third child with her husband Prince Carl Philip.

On Thursday, Sofia, 36, visited the Mandometer Clinic at Sophiahemmet in Stockholm, which provides treatment services to people with eating disorders. Sofia first visited the facility in June 2019.

During the outing, Sofia, who is due in late March or early April, wore a face shield over a mask as she spoke to the group and heard from the patients as they shared their personal stories.

"Since my first visit, I have been curious to hear more, especially at a time when COVID-19 guidelines and isolation can have an effect on the treatment process," Sofia said in a caption on the palace's Instagram.

"Two important messages that I got from my visit are that you can recover from your eating disorder and that eating disorders aren't always visible on the outside," she continued.

Princess Sofia's pregnancy news came in December, shortly after she and Carl Philip announced that they had tested positive for coronavirus and were quarantining. Earlier this month, the palace gave an update on her pregnancy following her diagnosis. "Princess Sofia is still fine, and everything is going well," they said in a statement.

Princess Sofia, 36, has been praised for her efforts to help amid the pandemic. In April, in order to help ease the strain on the healthcare system, she completed an intensive online training program in order to volunteer at Sophiahemmet Hospital, of which she is Honorary Chair. Princess Sofia and Prince Carl Philip shared their baby news with a stunning black and white photo posted on the royal family's official Instagram page. "We are happy and excited and look forward to welcoming our third child," they said. "A new little member of our family."

The baby will be a sibling for Prince Alexander, 4, and Prince Gabriel, 3.