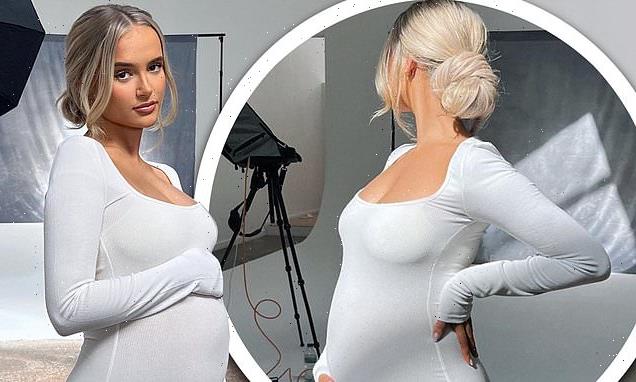 Pregnant Molly-Mae Hague has showed off her gorgeous bump in a stunning new snap just a day after teasing her baby’s gender in a black-and-white reveal clip.

The Love Island runner-up, 233, announced that she and her boyfriend of three years, boxer Tommy Fury, also 23, were expecting a child in a surprise announcement on Sunday.

Molly-Mae has since continued to share snaps of her ever-growing baby bump, and her latest post shows the PrettyLittleThing creative director donning an ethereal white skin-tight midi dress. 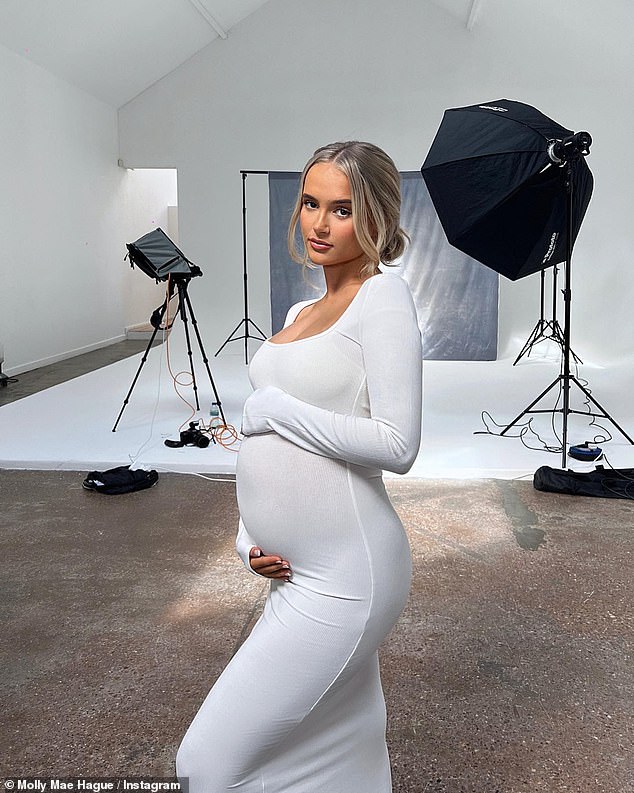 Baby mama: Pregnant Molly-Mae Hague has showed off her gorgeous bump in a stunning new snap just a day after teasing her baby’s gender in a black-and-white reveal clip

With her lengthy blonde tresses worn in a low bun and keeping some waves at the front to frame her face, Molly-Mae posed for the snap in a photo studio.

Behind her was the same setup pictured in her couple picture beside Tommy, where he cradled her stomach with a beaming smile as they gear up for their new life as a family unit.

Her post on Monday was linked to her new YouTube video which shares several heartwarming moments in her pregnancy journey so far, including the moment she told 23-year-old Tommy and popping her gender reveal balloons. 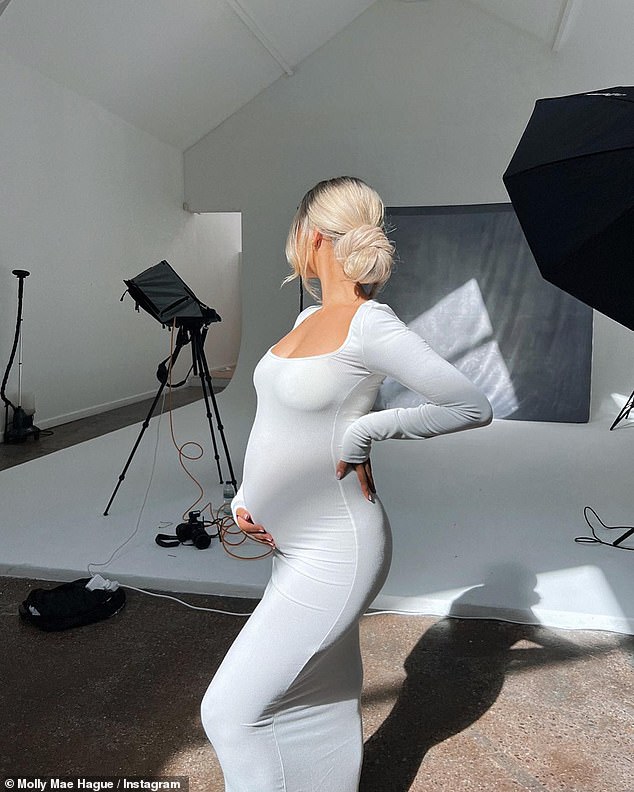 The video starts off with the scenic views Molly-Mae and Tommy posed amongst for their first reveal Instagram posts on Sunday.

Molly-Mae and Tommy walk hand in hand and stare lovingly into each others eyes, with her baby bump noticeable as she wears a strapless ribbed bodycon dress and her luscious blonde tresses in a beachy wave.

Then the journey of Molly’s pregnancy is shown, beginning with the Instagram star filming herself in the bathroom as she shows the pregnancy test come back as with a positive result.

She then sits down in the living area of their £4million six-bedroom Cheshire home, where she waits for Tommy to arrive. 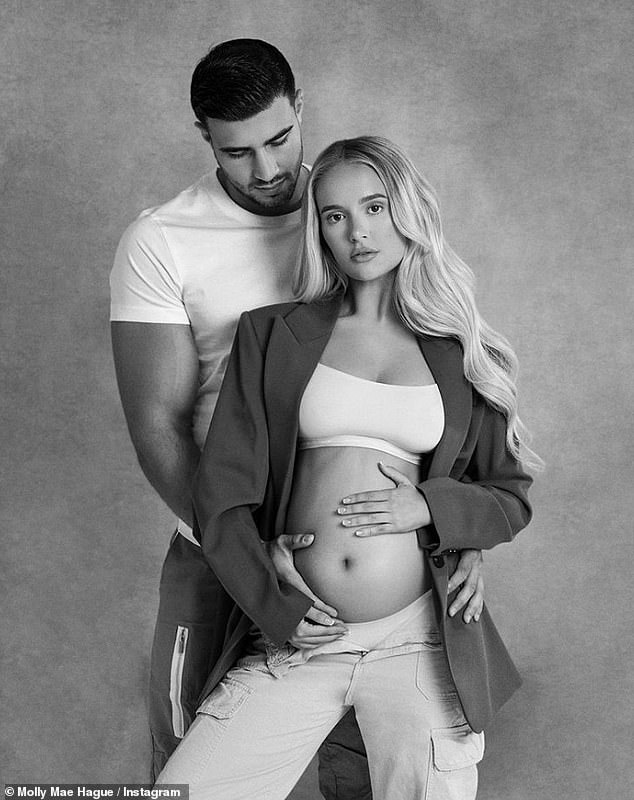 Baby love: Pregnant Molly-Mae Hague has teased a gender reveal in an adorable new video after announcing that she and boyfriend Tommy Fury are expecting their first child

He takes a seat before opening a package – only to find out that his girlfriend of three years – was now with baby in tow.

The look of shock takes over his face before he embraces Molly for a hug and a kiss.

At the baby’s first scan, Tommy films Molly as she bares her stomach for the ultrasound in hospital.

Tommy and Molly then beamed with joy as they showed the scans to the camera. 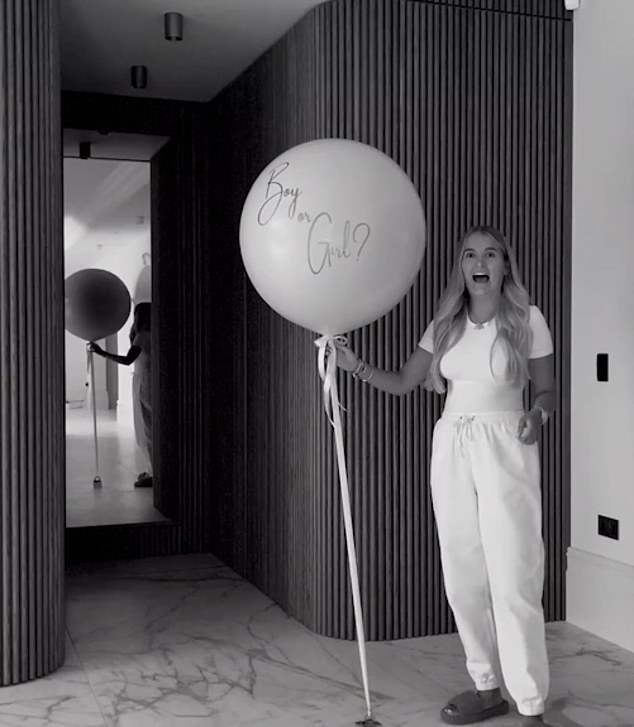 Exciting: Her latest post was linked to her new YouTube video which shares several heartwarming moments in her pregnancy journey so far 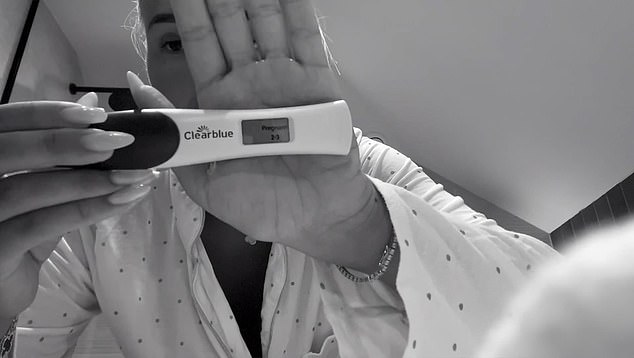 The first moment: The journey of Molly’s pregnancy is shown, beginning with her filming herself in the bathroom as she shows the pregnancy test come back as with a positive result

Another clip sees Molly-Mae show an app on her phone revealing the ever-growing size of her baby – at which point it was the size of a peach.

Molly could next be seen jumping with excitement as she stands next to a large balloon which reads, ‘Boy or girl?’ – but the black-and-white clip leaves fans in the dark as to what gender the baby will be once the couple pop it and confetti flies out.

But it seems they made the often public moment a very private, intimate affair as only the couple were seen in the heart-warming clip.

Fans of Molly-Mae and Tommy Fury believe they know the gender of the baby after the couple shared a picture of their supermarket shopping trolley during a late night shop in Tesco which had a pink rattle in. 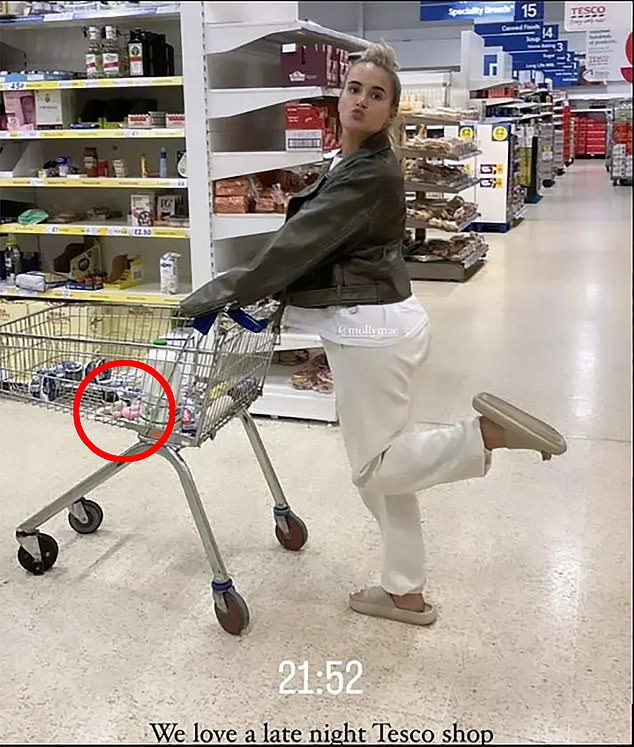 Is it a girl? Molly-Mae Hague and Tommy Fury may have accidentally let slip the gender of their baby as they enjoyed a late night shop pushing a trolley with baby’s rattle inside

While the rattle could still be for a boy – or could be a present for someone else – some fans think this means they are expecting a girl after the couple previously said they do know the sex of their baby.

Molly-Mae’s followers have also suspected that they spotted the star’s first baby bump snap – an Instagram post taken on September 1.

In the post the influencer, 23, teased a glimpse at her figure in a cut away black dress which draped over her stomach.

Fans were quick to speculate that the dress would have been perfect for concealing any pregnancy curves, commenting: ‘Can’t believe I didn’t see the bump; I can see it a little bit congratulations.’ 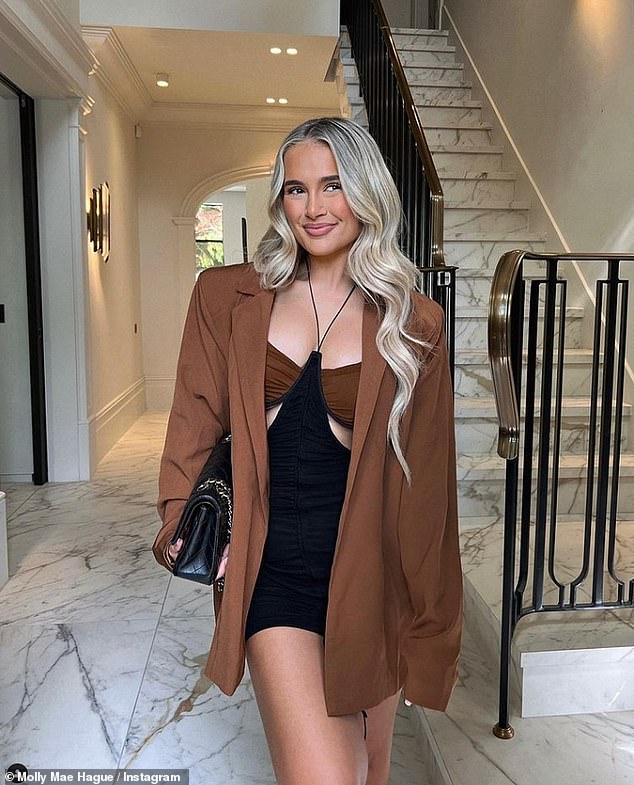 Mum-to-be: Fans of Molly-Mae also believe she revealed her baby bump on September 1 before announcing she was pregnant

Another posted: ‘There’s the bump!’

MailOnline has contacted Molly Mae and Tommy’s representatives for comment.

On Sunday, the two posted a tear-jerking black-and-white video of Tommy kissing her growing bump, Molly-Mae wrote: ‘I can’t wait for the adventures that we haven’t even dreamed of yet.’

The video began with Molly-Mae crying while reading those words in her end-of-season Love Island speech to Tommy during their 2019 stint on the ITV show.

After the pair hug in the throw-back clip, Molly-Mae unveiled a close-up her baby bump in a form-fitting ribbed sleeveless dress as ‘The Night We Met’ by Lord Huron could be heard playing. 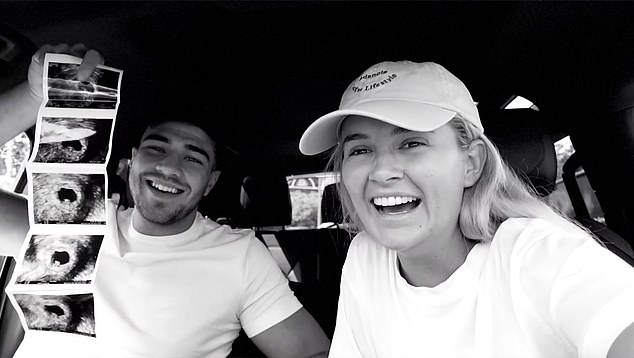 Overjoyed: Tommy and Molly beamed with joy as they showed the scans to the camera after their first baby scan 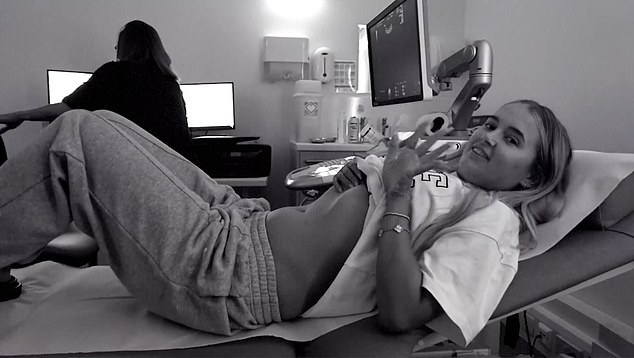 Baby steps: At the baby’s first scan, Tommy films Molly as she bares her stomach for the ultrasound in hospital

Tommy can then be seen crouched down, gently kissing her tummy while Molly-Mae laughs with joy, with her hands placed above and below her baby bump, before the pair share a loving embrace.

The announcement comes after Molly-Mae sparked speculation she may be expecting as several of her recent photos have been taken from the chest up, or where she is covered up in loose-fitting clothing.

It comes after the couple put on a loved-up display as they shared snaps from their romantic trip to Switzerland, after Tommy revealed his plans to propose ‘very soon.’

The boxer took to his Instagram Stories to give his 4.2 million followers an update on his relationship with the blonde beauty.

While catching up with his fans during the Q&A session one person asked Tommy: ‘When is Molly getting that ring… I think it’s time’ 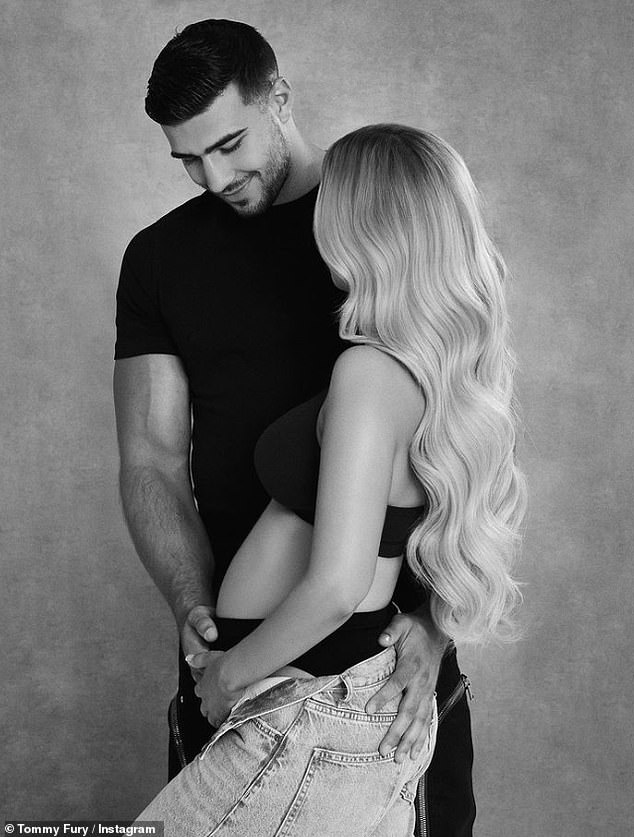 The couple were inundated with messages of congratulations from fellow Love Islanders, with Maura Higgins gushing: ‘AND THERE WE GO IM CRYING AGAIN!!!!!!LOVE YOU SO SO MUCH.’

Zara McDermott penned: ‘I’m sobbing my eyes out ❤️❤️❤️❤️ congratulations to both of you. what beautiful news.’

Fellow YouTuber Saffron Barker gushed: ‘I am so happy for you both. what truly beautiful parents you will be!!!❤️.’ 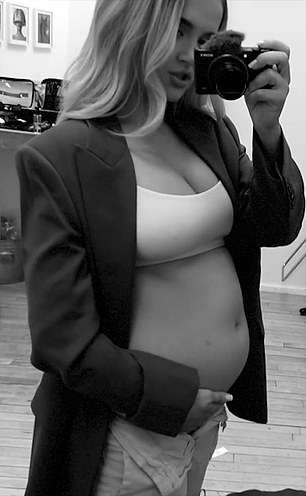 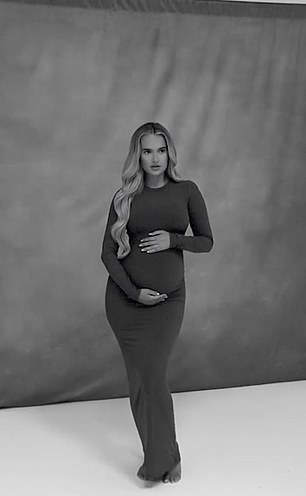 Bump: Molly shows off her baby bump while modelling for her first photo shoot while pregnant