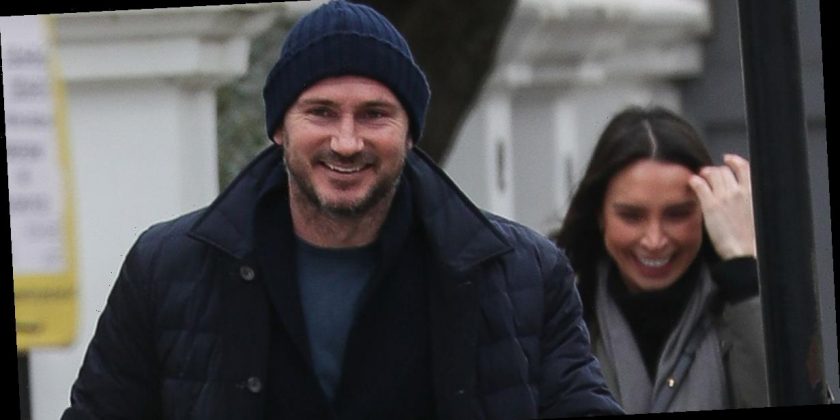 Christine Lampard has been spotted looking radiant with happiness as she stepped out for a walk on Valentine’s Day.

And, on Valentine’s Day on Sunday 14 February, the pair took time to enjoy their last few months as a family of three as they stepped out for a walk in Chelsea, London.

Christine looked gorgeous as she wore a black roll neck jumper with a dark grey scarf on top.

The pregnant star, who was reportedly left heartbroken after her husband Frank was sacked as Chelsea manager, wore a small amount of makeup on her face, with a hint of mascara on.

She wore her glossy brunette locks down in loose curls with a middle parting.

The Loose Women star smiled widely and appeared to be laughing as she pushed her adorable daughter Patricia, two, in a pram.

Christine and Frank’s little girl was seen wearing a pink knitted hat and a cream coat as the toddler sat in her buggy.

Soon-to-be mum-of-two Christine stopped at one point to lean in towards her daughter in the buggy and chat to her.

Meanwhile Frank, who was seen looking downcast after his Chelsea manager sacking, walked ahead of his wife and daughter with the family’s Shitzu dog Minnie on a leash.

Frank wore a pair of navy blue jogging bottoms along with a a matching cardigan, which he wore over a lighter blue T-shirt.

The former football manager kept the chilly February weather at bay as he wore a navy puffer coat and matching knitted hat.

Christine and Frank announced they were expecting their second child together in January.

TV star Christine shared the happy news on her Instagram as she shared a gorgeous photo of herself cradling her bump.

She then told her followers in the caption: “A new year and a new baby on the way for the Lampards!

“It’s been a strange and worrying time to be pregnant but we’re hoping and praying that cuddles from family and friends are not too far off. Sending all my love to everyone going through pregnancy during this crazy time,” alongside a praying hands emoji and a baby emoji.

As well as their adorable daughter Patricia, Frank is also dad to two daughters Luna, 15, and Isla, 13, from his relationship with Elen Rivas.