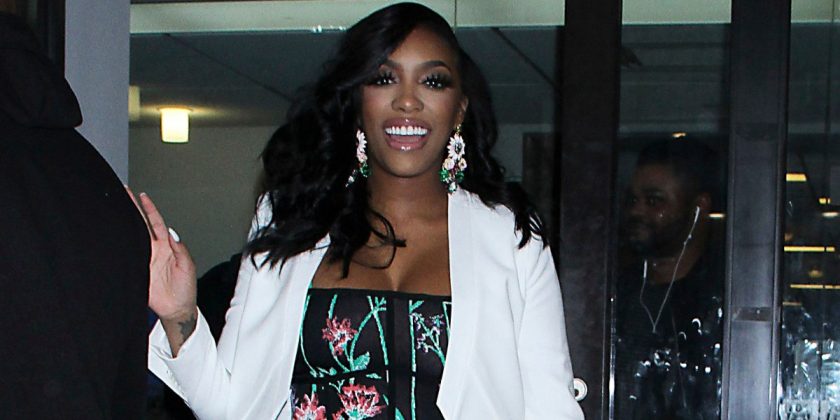 Porsha Williams baby daughter arrived in March, but fans are getting a throwback video showing the  ‘RHOA’ star heavily pregnant with her bare baby belly out while looking like a heavenly goddess.

Porsha Williams is reveling in being a new mom to her eight-week-old daughter PJ, but fans are getting a walk down pregnancy lane thanks to her Bravo reality show Porsha’s Having A Baby. She gave everyone a stunning reminder about the new upcoming episode that airs on Sunday, May 5 at 8pm EST. On May 3 she posted an Instagram video of her heavily pregnant in a gown that shows off her bare belly and legs while long flowing draped fabric comes floating down around her. She looks like a goddess in the outfit, which also features a crown of white flowers in her hair.

The 37-year-old Real Housewives of Atlanta star looks positively heavenly in the vid as dramatic violin music plays in the background while she stands in front of white columns. Fans absolutely loved it, with one raving “You make pregnancy so beautiful 💗💜” in the comments while another added  “Honey! You were simply gorgeous pregnant! Baby #2?!” “Beautiful looking like a princess for real wow 👑👑👑👑❤❤🔥” another fan gushed.

This week on the show, things get so tense between Porsha and fiance Dennis McKinley, 42 that they have to enlist the help of therapist Dr. Sherry Blake. According to Bravo’s preview for the May 5 episode. it takes place just few weeks before baby PJ’s arrival and the couple still can’t agree on where to live. Porsha wants to nest at her house in the Atlanta suburbs while Dennis prefers to live in the city closer to his work. “Between working to finish the nursery, finding a nanny and dealing with mothers-in-law’s, pressure is mounting from all sides and the couple seek help in therapist Dr. Sherry before things spiral out of control,” the show’s website promises.

In the April 28 episode, viewers watched  as the pair decided that they might need some more help when their baby daughter finally arrives, and they brought in their mothers as reinforcements..They also had deep discussions about all of the preparations that they had to get done in anticipation of becoming new parents while still struggling with where to live.