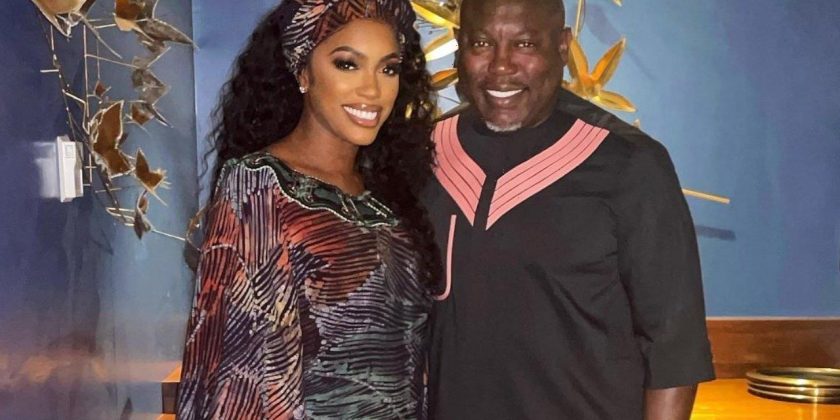 Four months after Simon proposed to her, the ‘Real Housewives of Atlanta’ alum gets her fiance his own engagement ring as a reminder until they officially tie the knot.

AceShowbiz –Porsha Williams and Simon Guobadia are sealing their engagement not with just one, but two rings. Four months after her fiance proposed to her, the reality TV star has decided to buy him his own engagement ring.

Porsha purchased the ring during a trip to Las Vegas with Simon and another couple. Making use of her Instagram account, she shared on Monday, September 27 a series of posts to document the emotional moment.

In the first video, Porsha, Simon and the other couple were already at Tiffany & Co. with the two men flaunting the new rings on their left hands. Tiffany and her female pal were all excited, shouting, “We locked them down.”

Porsha was then seen jumping in excitement while her female pal repeatedly said, “This is happening.” The former Bravo star then waved her credit card in front of the camera before handing it to the cashier, proving that she’s the one who paid for Simon’s ring.

“And did!!! CRAZY IN LOVE PART 1! It’s official!” Porsha captioned the clip, adding the hashtags “#WhateverHeWANTS” and “#WhatHappensinVegasLastALifetime”.

In the second video, Porsha was seen choking up while waiting for a female employee to complete the purchase. She later shared a tight and warm embrace with her man and they kissed several times.

“Taken 4 real,” so she wrote along with the clip. Explaining what the ring signifies, she added, “I said yes and so did he !!! Yes we both are professing our love and reminded every time we look down at our left hand that thus is a promise and love that will last a lifetime !! We will be husband and wife and I can’t freaking wait! Love you Pooh!!”

Porsha also gave a close-up look at Simon’s ring, which is a simple band with no stone, and hers, which is adorned with a huge emerald cut diamond. “My Love The Guobadia’s Loading…. ( Thank you for all of the well wishes !! We love you),” she wrote in the caption of her third post.

Porsha’s famous friends were equally excited with the couple’s declaration of their love for each other. Kim Zolciak gushed, “Love this!!!!!” while Tamar Braxton commented on one of her posts, “I knew it!!!!! Amazing.”

Some Internet trolls, however, mocked Porsha for buying the ring for her fiance. “Girl lmfaooo she crying cause she had to buy it or??” one wondered. Another shared a similar reaction, “lmfaooo I’m cackling.”

“She definitely ain’t wanna buy that s**t but she boutta get that money back in blood though fosho,” a third assumed about her tears. Someone else speculated, “She’s crying because she really gotta see it through.”

Porsha announced her engagement to Simon in May, not long after he split from Falynn Pina, her former co-star on “The Real Housewives of Atlanta“. They are planning to tie the knot in 2022.