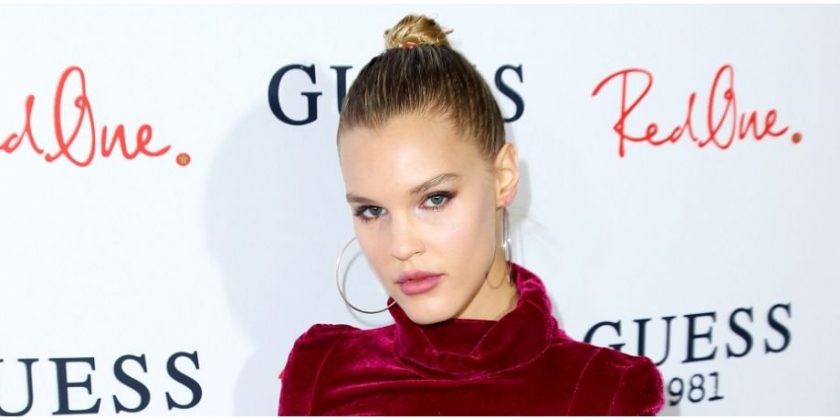 Joy Corrigan is showing off her toned beach body in a new set of very racy photographs. The Playboy playmate was photographed by paparazzi as she posed for some new pictures while donning a teeny tiny bikini on the beach.

According to a December 8 report by the Blast, Joy Corrigan was seen frolicking in the ocean as she wore a pair of skimpy white bikini bottoms and a much-too-small maroon bandeau top that left very little to the imagination, as it barely covered her chest and flaunted all of her assets.

Joy had her shoulder length blonde hair parted down the middle and styled in messy, loose waves as she played in the ocean and posed seductively for cameras. The tiny bikini also showed off Corrigan’s flat tummy, toned arms, and long, lean legs as her girlfriend snapped photos of her.

In some of the photos, Joy’s girlfriend jumped in the shots with her, and donned a racy orange bikini of her own as she pulled her long, dark hair back away from her face while standing in the water.

It’s unclear what Corrigan’s photo shoot was for. Perhaps she is just getting some hot shots for her social media accounts, or she may be working on a new magazine or internet spread for a publication.

The report reveals that Joy, who was Miss February 2017 for Playboy, was spotted in Miami this week as she checked out the annual Art Basel in the city.

Who else pairs their favorite running shoes with every outfit? ???? Ok maybe it’s just these sick new HOVR shoes from @underarmour I’m obsessed with ????????????! #UAHOVR #ad

According to Joy Corrigan’s IMDB page, the model is also an actress who is known for her roles in films such as Aftermath, which was released in 2017. Joy portrayed the role of Shelly in the film, which co-starred Arnold Schwarzenegger, Scoot McNairy, and Maggie Grace.

Joy also had a role in 2018’s Reprisal, in which she played a character named Katy. The movie starred Bruce Willis, Frank Grillo, and Johnathon Schaech. She also appears as herself in the TV movie Power of a Wish Gala, and even appeared on the funny Comedy Central series Tosh.0 back in 2014.

Last month, Corrigan was featured in Maxim as she covered the magazine’s French edition. Inside the pages of the publication, Joy reveals what attracts her to the opposite sex. “I’m really attracted to a guy who can make me laugh, play an instrument, or beat me in chess,” Corrigan revealed, adding that her favorite thing to do in a relationship is bond through competitive activities.

“If I’m dating someone, one of my favorite ways to connect is through a competitive activity — whether it’s boxing, chess, or a cook-off of our favorite dish,” the model confessed.

Fans can keep up with all of Joy Corrigan’s latest work via her social media accounts.