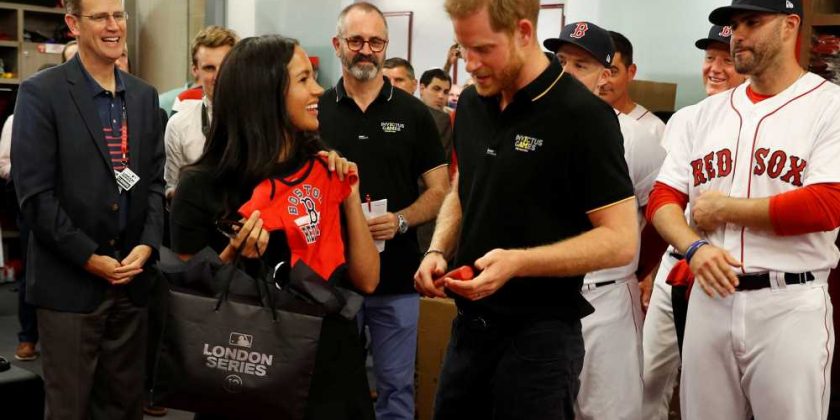 The new parents to son Archie spent Saturday at London’s former Olympic stadium for the first-ever regular season MLB game played in Europe. The biggest rivalry in baseball came across the pond — the New York Yankees took on the Boston Red Sox (unfortunately, no Kansas City Royals for the prince to cheer for!) — for the two-game series being played over the weekend.

Meghan opted for a black dress with a color-coordinated belt while Harry proudly wore his Invictus Games polo.

And the couple even received a special Red Sox onesie and mini Yankees jersey for Archie!

Although the 34-year-old royal is more familiar with the polo field — he recently headed to Rome, Italy, to play in a match supporting his Sentebale charity — this isn’t Harry’s first brush with America’s pastime.

Harry threw the first pitch at a New York Mets game during his 2010 visit to the U.S.

The then 26-year-old prince smiled as he strode out to the pitchers’ mound wearings a Mets baseball cap on U.K. Armed Forces Day. He joked with the catcher, took a deep breath, then impressively threw the ball right over the plate.

Prince Harry also tried his hand at the sport again during a 2013 visit to New York City.

He visited the Harlem RBI baseball youth development program and played T-ball with children from the area and former Yankees player Mark Teixeira.