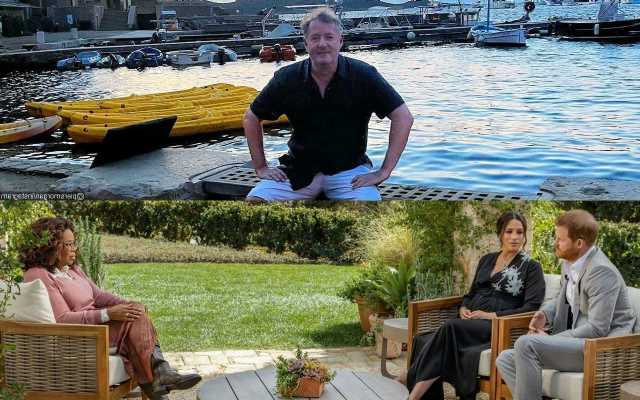 The British TV personality attacks Oprah, who conducted the bombshell 2021 interview with Meghan Markle and Prince Harry, after she wishes for a peacemaking between royal family after Queen Elizabeth II’s death.

AceShowbiz –Piers Morgan once again caused controversy with his remarks regarding Meghan Markle. The British TV personality received mixed responses after blaming Oprah Winfrey for enabling feud between the Duchess, her husband Harry and the British royal family with their bombshell CBS interview in 2021.

Piers took to his Twitter account to respond to Oprah’s recent interview with Extra about the death of Queen Elizabeth II while attending the Toronto International Film Festival. In the interview, the TV mogul expressed hopes that the sad occasion could be “an opportunity for peacemaking” for the royal family.

Piers didn’t think Oprah was the right person to say that. “Great to see Oprah Winfrey call for a healing of massive rifts in the Royal Family.. that she enabled,” so Piers wrote on the blue bird app. He’s referring to CBS’s “Oprah with Meghan and Harry” in which the Duke and Duchess of Sussex made shocking claims about the royal family including allegations that a senior member was being colorist towards their first child Archie.

Some Internet users quickly blasted Piers for his opinion. Accusing him of being jealous of Oprah, one person tweeted, “He was expecting access in the form of interviews but Oprah beat him to the punch and Meghan doesn’t return Piers calls.”

Another person said, “Oprah Winfrey did not ‘enable’; she did her job, a great interviewer. Harry and Megan’s phenomenon was not the best for outsiders; equally, the monarchy didn’t try its best for the public too. Piers Morgan isn’t doing us good favour by trying to score political points either.”

“Oh come on, it’s never a journalists fault for getting the story, it’s the people who made the statements we should judge,” read another response to Morgan.

Some others, meanwhile, believed that Oprah was partially responsible for causing rift between the royals. “I loved Oprah until that interview it was divisive and at best sloppy journalism I’ve never been so angry at someone I adored, the interview has set relationships with our country and USA back years and has undone all that the Queen has stood for its vile and unforgivable…,” one user noted.

Defending Piers, one other added, “It doesn’t matter what people think about Piers Morgan. Love him or loathe him he usually gets it right in what he says.”