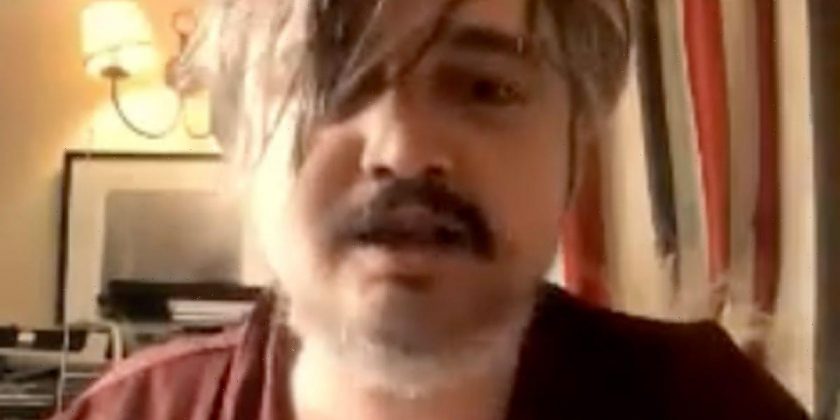 Pete Doherty has added a grey beard and moustache to his transformation after appearing unrecognisable following his move to the French countryside.

The 42-year-old was spotted out with his girlfriend Katia De Vidas last month, looking happier and healthier than during his time as part of The Libertines in their heyday.

But he has now shown off a new addition to his transformation, appearing with facial hair on a Zoom call that was then shared on social media.

Rockstar Pete took to Instagram on Wednesday to shared a clip of himself singing Gotta Do More Gotta Be More by rock band Trampolene, who are signed to his record label Strap Originals.

Donning what seems to be a Burgundy coloured housecoat as he sat at his computer to joke around with a pal, Pete showed off his floppy hair and gave fans his first glimpse of his new greying moustache and beard.

After being spotted after years out of the limelight last month, Pete admitted his new look was down to his love of cheese on toast.

Following the pictures of him looking unrecognisable being released online, Pete told The Sun: "I like Comté, Comté on toast. My guilty pleasure is sleeping.

"For years and years, I would stay up for five or six days and then I would sleep for 24 hours, so now I love sleep.

"At the moment I'm quite clean. I stopped taking heroin and ketamine," he explained.

A source had previously told the publication: "While lockdown has been tough for so many people, Pete is honestly the happiest he's ever been.

"He used to live a fast-paced, hedonistic lifestyle. He was the epitome of rock and roll. But the relaxed pace of life suits him more.

"He and Katia have been spending time in Étretat, a coastal town popular with visiting Parisians," the insider shared.

"He still has a hand in music as that's his number one passion, of course, but going to France has allowed him to relax.

Pop stars in the news

"Over the last few months he has taken his foot off the pedal and has really been enjoying his downtime."

They continued of Pete's relationship with Katia: "They spend lots of time cooking and walking the dog. It's a very genteel lifestyle in comparison to the way he used to live.

"Pete's in a good headspace at the moment and life is really positive for him."